What’s it like being the younger brother of perhaps the most influencial bishop in the United States today? In his new book, “Life Lessons: From My Life with My Brother, Archbishop Timothy M. Dolan,” Bob Dolan gives readers a glimpse into their childhood and later years as his brother climbed the hierarchical ladder. 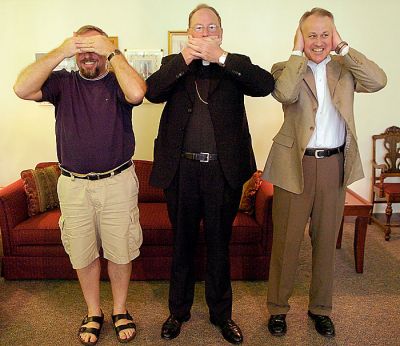 Archbishop Dolan plays the part of “speak no evil” following a visit to St. Agnes School in Butler, Wis., in 2005. (Sam Lucero photo)

On Feb. 23, 2009, Archbishop Dolan of Milwaukee was appointed archbishop of New York. From Ballwin, Mo., where the Dolan children were raised, to the Big Apple, the affable archbishop has made a favorable impression on just about everyone with whom he has come in contact. Thanks to Bob Dolan, many of the anecdotes known only to family and close friends are presented in this book.

As anyone who has been in Archbishop Dolan’s presence, even briefly, would guess, humor is part of Bob Dolan’s recollections, beginning with the book’s introduction.

Dolan recalls one night in 1965 when his parents, Robert and Shirley, were off bowling, leaving Tim and sister Deborah home to babysit. Dad admonished the older children not to allow little brother Bob to watch The Alfred Hitchcock Hour. The temptation was too great and, as expected, the episode – ending with a man dressed as a female nurse strangling someone – left Bob petrified.

Bob describes what happened when it was time for bed.

“Younger Brother … flips on the light switch, but nothing happens. … He walks across the room feeling for the desk lamp. He is nearly there when he hears the bedroom door slam shut behind him. He turns in horror. There stands older brother. He is wearing his mother’s bathrobe and holding a mop on the top of his head so it looks like a wig.”

Approaching his little brother, Tim echoes the last words in the Hitchcock program, sending his brother into a tizzy. “Yes, you forgot about Sam!” While Bob is screaming in terror, “Older Brother howls with laughter.”

Most of Dolan’s book is written as a dialogue between himself and his brother. Several “Life Lesson” chapters serve as nuggets of informal religious instruction taken from experiences in the brothers’ lives, such as dealing with grief and using humor to embrace humility.

“I suppose I want my humor or stories or jokes to hopefully remind all of us, including me, that we are all imperfect,” Archbishop Dolan tells his brother. “We are all sinners and we all need our Savior. Admitting that is a powerful and beautful act of humility.”

Self-effacing humor is Archbishop Dolan’s specialty. Here are a few examples cited in the book.

The remaining chapters offer insights into Archbishop Dolan’s time as rector at the North American College in Rome, his time as a priest and auxiliary bishop in St. Louis, his seven years in Milwaukee and his appointment to New York.

Having served on the staff of the Milwaukee Catholic Herald when Archbishop Dolan was appointed there in 2002, and having covered many of his pastoral visits to parishes around the archdiocese, Bob Dolan’s book brought back pleasant memories for me. From that first press conference at the Cousins Center — where I first met Bob and heard him and his wife, Beth, proudly describe how brother Tim was the right man for this post — to events like the pallium pilgrimage to Rome in June 2003, reading about these events reminded me how fortunate I was to be part of an important period U.S. church history.

And if you’re in New York and happen to catch Archbishop Dolan after Mass at St. Patrick’s Cathedral, stop and say hello but please don’t bring up one subject, advises his brother.

“Just don’t ask him about a future Pope Timothy,” writes Dolan. “Do not go there.” That’s a subject off limits to everyone – except his mother.

(“Life Lessons,” published by Tau Publishing can be ordered online by going to this link.