Bishop David Ricken also expressed delight. “I know that the Catholic community of northeastern Wisconsin will welcome our new monastic neighbors with joy. Their prayerful and hospitable presence will enrich us all. I encourage all Catholics to become better acquainted with the monks and with the rich heritage of the Christian East that they embody.” 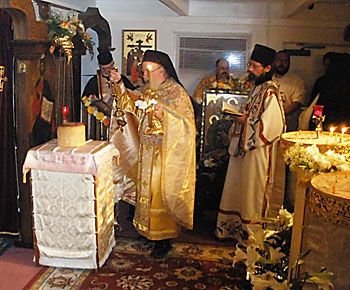 Abbot Nicholas Zachariadis, center, superior of Holy Resurrection Monastery, is pictured during a Holy Week liturgy. Abbot Zachariadis and monks of the monastery will move to St. Nazianz in late October.

The monks’ new home has a long and storied history in St. Nazianz. The village itself is named for one of the great Eastern Fathers of the Church, St. Gregory Nazianzen. “This name was in itself one of the great signs we felt the Lord was giving us,” said Abbot Nicholas Zachariadis, superior of Holy Resurrection. “How many towns in America are named after a father of the church, let alone of the Eastern Church?”

The monks will become part of a long Catholic tradition going back to the founding of the village community in 1854 by the German pioneers led by Fr. Ambrose Oschwald. The property the monks are buying was originally used by the religious sisters founded by Fr. Oschwald. Subsequently it was occupied by the Salvatorian sisters who used it for various purposes until 2000 when they sold it to private owners. For the past decade the building and grounds have been used as a small retreat center, a ministry that the monks will continue.

The monastery will have about a dozen guest rooms for private retreatants and small groups. They also plan to develop a program of one day retreats and adult enrichment workshops designed to immerse people in the rich spiritual and liturgical tradition of the Eastern Christian tradition. The monks primarily use English in their liturgical services.

The monks are also interested in taking up invitations to speak to parishes and other organizations about their life and traditions. “This is most definitely the age of the New Evangelization,” said Abbot Nicholas, “and we need to be a part of it. The truth is that no single tradition is big enough to evangelize the whole world, or even the smaller worlds of our local communities.

“If the church is to fulfill its mandate, it needs to draw on the witness of the whole of its traditions, East and West. That’s why Pope John Paul II was so insistent that the church had to ‘breathe with both lungs,’ something Pope Benedict has echoed many times,” he added.

To learn more about the monks of Holy Resurrection Monastery, visit their website: www.hrmonline.org.