In 1886, the residents picked the highest spot in Leopolis on which to build a log church and completed it the next year. The altar was built by Matthias Cerveny. Membership was about 15 families, made up of mostly Bohemian people, a few Germans and one French family. They dedicated the church to their Bohemian patron saint, St. John Nepomucene. 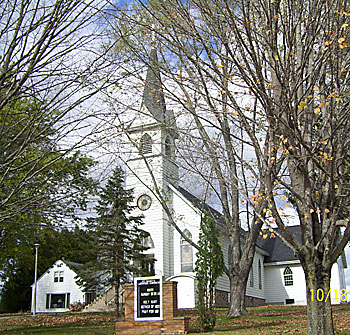 St. Mary of the Assumption Church in Leopolis was dedicated in 1912, but the cornerstone reads 1911. The parish will mark 100 years of the church’s construction on Oct. 30, along with the 135th anniversary of the first Mass celebrated in Leopolis. (Submitted photo | For The Compass)

By 1910, their church became too small, so they razed the log building and built a 32-foot-by-80-foot wood-framed building with a full basement. The cornerstone on the church reads 1911, but the new church was dedicated in 1912 to a new patron saint, St. Mary of the Assumption.

From the 1880s to 1940s, St. Mary was a mission church, served by priests from Gresham, Keshena, Shawano and Clintonville. St. Mary became an independent parish with its first resident pastor, Fr. Anthony Baier, in 1946. Under his leadership, the parish rectory and sacristy were added in 1949.

No major changes to the building were made until 2004, when Fr. Harry Hafeman initiated the building of a side entrance addition, with an elevator, making the church handicap accessible. This project was completed and blessed by Bishop David Zubik in 2006.

That same year, St. Mary was linked with the parishes of St. Anthony in Tigerton, St. Mary in Marion and Holy Family/St.William in Wittenberg. Fr. John Girotti was appointed pastor of all four parishes with Fr. Hafeman assisting him.

During Fr. Girotti’s pastorate, the parish embarked on a ceiling restoration project with traditional painting done by professional artists from Milwaukee. When Fr. Girotti was appointed rector of St. Francis Xavier Cathedral in Green Bay, the project was continued and supported by his successor, Fr. Lloyd. It was completed in the fall of 2010.