A Dutch missionary priest established St. John Catholic community in 1836. Franciscan Fr. Theodore Vanden Broek first arrived in the United States in 1832. Two years later, he was transferred from Cincinnati to Green Bay. Fr. Vanden Broek made his way along the Fox River to serve a Menominee Indian settlement in “La Petite Chute,” as it had been named by the early fur traders. A bark wigwam served as the first church. Construction of a new church was completed in 1837. 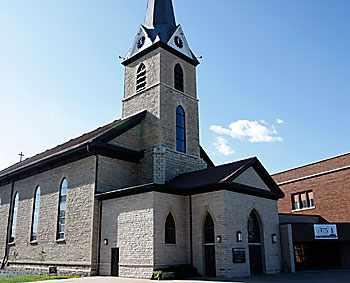 St. John Nepomucene Church in Little Chute is the site of a 175-year parish anniversary celebration Oct. 29. Bishop David Ricken will join the parish for the anniversary Mass. (Rick Evans | For The Compass)

The faith community grew considerably in 1848. Fr. Vanden Broek had returned to the Netherlands following the death of a family member. While in his homeland, he shared news of the opportunities that existed in the Fox River Valley. The response was so great that three ships were chartered for America. Fr. Vanden Broek died in 1851.

Construction of the current St. John Nepomucene Church began in 1860 and was completed in 1868. Gene Janssen, a lifelong parish member, explained that the cholera outbreak of the time and volunteers called to serve in the Civil War delayed construction.

Renovations have been made to the church throughout the years. Additions, including the church tower and stained glass windows, were made in 1894. Janssen was part of a major interior project in 1965. He said that while upgrades were necessary, traditions were preserved. He recalls a small gesture in appreciation of those who came before him.

“When we tore up the old floor, some old coins were found underneath it,” he said. “We threw them back and put in the new floor, so someone else will find them someday.

“It was a huge project,” he added in reference to the renovations. “We put in new carpeting, redid the Stations of the Cross and put marble in back of the altar.”

A grant from the estate of Herman and Gertrude Stark, brother and sister, provided financial support for the project. Items and materials were saved when possible. Parishioners made sure that statues survived by taking them for their homes, said Janssen. When the Communion rail was removed, some women found a good use for the marble, he added.

“They used it for making fudge,” said Janssen. “(Parish member) didn’t throw much away. They found a use for it.”

Fr. Martin Vosbeek was the pastor at St. John during the major renovation project, which also included copper sheeting the steeple and insulating the church. Fr. Vosbeek, who served as pastor in Little Chute from 1956 until his retirement in 1969, was credited with hiring the first parish secretary in the diocese when he appointed Clara Rutten to the position in 1960.

Fr. Norbert Van De Loo succeeded Fr. Vosbeek as pastor. It marked his return to the parish. In 1943, Fr. Van De Loo was appointed an assistant at St. John. He oversaw the closing of St. John High School in 1972.

Msgr. Jim Vanden Hogen succeeded Fr. Van De Loo in 1975 and would serve as pastor in Little Chute for 31 years. Msgr. John Sprangers is tops in longevity in the parish history. He became the first American born pastor at St. John in 1915 and led the parish until his retirement in 1956. Msgr. Sprangers, who died in 1962 at age 88, is buried in St. John Cemetery.

Msgr. Vanden Hogen, who retired to senior priest status in 2008, lives in Little Chute and helps out with Masses at St. John and other area churches when needed.

“It was always my desire to come back here (in retirement),” he said. “I have a lot of close friendships here. I am asked to do funerals and I had five weddings this year. That’s fine with Fr. Jim Hablewitz (current pastor), which I appreciate.”

Fr. Hablewitz became pastor at St. John in 2006. The appointment marked a return to the parish. He served as an assistant pastor in Little Chute in 1967.

In his long tenure as pastor, Msgr. Vanden Hogen said the parish had 11 associate pastors, two deacons, six liturgists/musicians, six school principals and four business managers. Ministries and programs grew throughout those years, he added, including faith formation and youth ministry, and family life and stewardship through the formation of committees.

Msgr. Vanden Hogen oversaw the church’s most recent renovation project, a $3.2 million remodeling in 2003. Changes included a new west wing, an altar and ambo made from the old marble altar, a new front entrance, expansion of the fellowship hall, air conditioning and an audio-visual system. Two new stained glass windows were added, one depicting Fr. Vanden Broek, and the other, St. John Nepomucene.

Today, St. John has more than 1,000 families. Janssen, who has helped compile historical information for the parish, said the generosity of the people stands out over the years and was present when planning the anniversary celebration. For example, the Athletic Association is paying for all refreshments at the dinner and the St. John Mission Club is assisting with expenses.

“We have invited priests who are from the parish, the 52 sisters from Little Chute were all contacted,” said Janssen, who also served on the 150-year anniversary committee. “All those who were assistants here were invited. Fr. Bert Ebben (a Dominican missionary priest from Little Chute) is serving as our master of ceremonies. To help pay for the traveling expenses of the priests coming in from outside the area, we asked for donations. There was a good response.”

Msgr. Vanden Hogen will be celebrating Mass in Kimberly, so he will miss the anniversary liturgy, but will be at the dinner. He said that he hopes people are proud of what the parish has accomplished in its history.

“We take pride in the fact that we are the mother parish in the area and all the daughter parishes grew from that faith,” he said. “We can take pride that we have a strong family of worshippers who have supported us well and prayed well. The sisters of the past have been a great influence. I hope people take notice of their ministry as well as all the priests and others who served. We have a proud tradition of opening our hearts and homes to others. …We can be proud of where we’ve come from and where we are today.”