McDonald and Lady Knights on the road back to state

“I would like to finish,” she said with a laugh when asked about this season’s goal for state.

McDonald has a good chance to do more than just finish. Based on her success this fall, she could find herself on the podium among the state’s top runners. Last week, McDonald won her third consecutive Trailways Conference individual championship. Other first place finishes for McDonald include the Kettle Moraine Lutheran Invite and the D.H. McDonald Memorial Invite, which is named after her grandfather. She has also competed well against top Division 1 competition, finishing second at the Bay Port Invite and fourth at the Neenah Invitational. 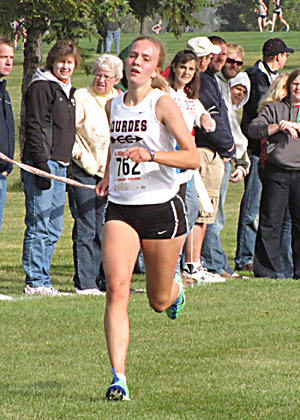 Clare McDonald of Lourdes High School (Oshkosh) runs to a first place finish in a time of 15:09.14 at the D. H. McDonald Memorial Cross Country Invitational, Sept. 24 at Lake Breeze Golf Course in Winneconne. McDonald and the Lady Knights are seeking a second consecutive WIAA Division 3 state championship. (Submitted Photo | For THE COMPASS)

“I think (competing against bigger schools) helps,” she said. “You don’t want to always be the team running out in front. When you go to a bigger race, there is a mix of people.”

Lourdes, the top-ranked team in Division 3 according to the Wisconsin Cross Country Coaches Association, will compete in the Iola-Scandinavia sectional on Friday, Oct. 21. McDonald said that the squad doesn’t feel much pressure even though expectations were high after returning nearly all its runners from a year ago. The state meet will be held on Oct. 29 at Ridges Golf Course in Wisconsin Rapids.

“It’s all about just going out there and doing your best,” she said. “I don’t know if anyone has been dwelling on (winning state) too much.”

Some new faces make this year’s squad seem like a different team, she added. Tim Moore, who also coaches track and field at Lourdes, is leading the cross country program this season. The Lady Knights have some freshmen who have contributed to the team’s success, including Mackenzie McDonald, Clare’s sister. Running is a family sport. Older brother, D.T. is redshirting as a freshman at Marquette. He will compete in both cross country and track and field for the Golden Eagles. Maeve, a sophomore at Lourdes, finished 13th at the 2010 state cross country meet.

“I’ve always had a sibling on the team,” said Clare. “I like it. Marta Keller, another senior on the team, has a sister, Nora, who is a freshman, so we share that experience.”

The state meet would mark the sixth straight for the Lourdes girls and the fourth consecutive for Clare. She recalls feeling a bit overwhelmed during her first trip in 2008.

“When you are a freshman, you don’t know what to expect,” she said. “You just have to experience it. It was all so new and there were so many people. It’s so exciting because it’s state. The next year it was easier. The experience helps.”

Clare added that she has trained harder each season. Last summer, she participated in camps and the Lourdes runners gathered regularly to work out. It also helps having runners in your family.

“If you’re lacking motivation, there is always someone there,” she said.

In the spring, Clare will compete on the track for Lourdes. Last season, she was a member of the WIAA Division 3 state champion 4 x 800-meter relay team. She also finished fourth at state in the 3,200 meters and fifth in the 1,600-meter run. She hopes to run in college. Whatever the future brings, running will always be a part of her life, she said.

“I enjoy just going out and running,” said Clare. “I like that you can do it anywhere and anytime.”

She has learned to conquer the mental challenges presented by the sport.

“You are in a race and you can stop at any point,” she said. “You don’t have to keep going. You don’t have to keep pushing to go faster. You can say to yourself, ‘I’m not feeling so well, I will just slow down for awhile or walk.’ It’s up to you to decide what you’re going to do. You think about a lot of things when you run.”

Clare downplays her individual accomplishments. She said that her goal each season is to improve and to help the team. The Lady Knights dominated the conference meet. Sophomore Abby Moore finished second behind Clare. Nora Keller followed in third, sophomore Maddy Reed finished fifth and Maeve recorded an eighth place finish. A second straight team state title would be a great end to her prep cross country career, said Clare.

“I was just thinking about when I came in as a freshman,” she said. “The teams had competed at state. I knew we could be good, but it’s amazing to look back and see how far we’ve made it.”