The evening started with Jones talking about his upbringing and how he came to be pro-life. He was raised in Chicago with five brothers and sisters. “I never went to church a day in my life,” said Jones. 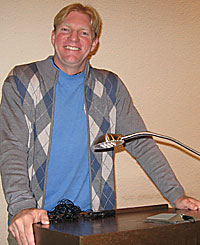 Jason Jones, who served as producer of the award-winning movie “Bella,” is pictured at a talk hosted by Most Blessed Sacrament Parish, Oshkosh, Oct. 5. (By Amanda Lauer | For The Compass)

A life-changing event happened to him two days before he turned 17. His girlfriend told him she was pregnant. They made the decision that he would drop out of high school on his 17th birthday and join the Army and she would do her best to hide the pregnancy.

Six months later he received a phone call from his girlfriend. “I have never heard a girl cry like that before or since,” he recalled. Her father got on the phone and said, “I know your secret, and your secret is gone.” The man had forced his daughter to get an abortion. Jones said his heart broke not only because of the sound of his girlfriend’s crying but because their daughter had been destroyed. Up until that point he had no idea that abortion was legal in the United States.

“I promised my girlfriend that if it took to the end of my life, I would stop abortion,” said Jones. When he was stationed in Hawaii he started going door to door spreading the pro-life message and eventually became the director of Hawaii Right to Life. For 13 years he was what he called a pro-life atheist.

The more pro-life he became, the more anti-Catholic he became. His former girlfriend’s father had been a prominent Catholic. “Growing up in Chicago, all the examples I had of Catholics in my world were outspoken advocates of pro-abortion candidates, which I found scandalous,” he said.

Eventually Jones started to investigate different religions. The thing that struck him about Christianity, he said, was that in every other religion, God asks man to sacrifice for him; but the basis of Christianity is that God sacrificed himself for man. Jones read and studied countless books on religion during this time and started reading the Bible. After reading Is: 53-54, he became Christian. From there he started studying the Catholic faith and on Aug. 6, 2003, he was baptized and confirmed.

After becoming a Catholic, Jones discovered that both he and his wife, who is Chinese, had Catholic heritages. His father gave him a rosary that had been his grandfather’s confirmation rosary and had been with him when he served in WWII and the Korean War.

According to Jones, the greatest tragedy in the 21st century is the culture of death. “As Christians and Catholics we need to race to save our century. Catholics need to vote with integrity. We need to participate in politics. The pro-life flag should be planted in both parties. God has given us the grace to end abortion. This will only happen when Catholics vote with integrity, are faithful in their prayers and are serious about defeating the culture of death.”