“I thought my mother had planted the tulips in the wrong place, so I dug them up and moved them, only I had cut the tulips off and left the bulbs in the ground,” Denil said. “I got heck for it from my mother, but she explained to me what I had done and that’s where it all started with my passion for plants.” 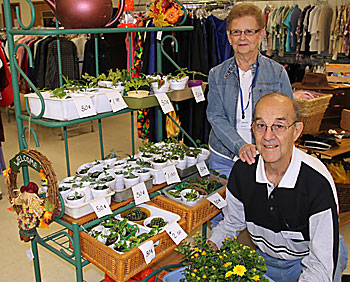 Jim and Dorothy Denil (Steve Wideman | For The Compass)

For the past four years Jim and his wife, Dorothy, have shared the bounty of Jim’s passion by donating several thousand plants of all types, some grown from seeds and others rooted from existing plants, to the St. Vincent de Paul Store on College Avenue in Appleton.

For prices averaging 50 cents to $2, shoppers at the store can get a good deal on plants, like the popular hostas, with all proceeds going to St. Vincent de Paul.

“Money from the plant sales really helps St. Vincent’s function as an organization,” Denil said, noting that, as of Oct. 1, he had donated 1,718 plants to St. Vincent’s this growing season and sold nearly out of them.

“If someone had told me people would have bought so many of the plants, I would have said they were lying,” Denil said.

Jim starts growing plants for donation in his insulated and heated garage where special “grow lights” emit just the right kind of rays to keep the plants in a happy and growing mood.

When not growing and donating plants, the Denil’s have a reputation for showing up to help out at St. Vincent’s seven days a week to sort donated merchandise.

“We always said that some day, when we retired, we would help others here at St. Vincent de Paul,” Dorothy Denil said. “So whenever we get free time we stop in.”

Jim’s reputation for helping also extended to his neighborhood where at one point he would clear snow from the driveways of 13 elderly neighbors.

“My feeling is that is our mission. Living our religion is to help other people,” Jim Denil said.

Jim and Dorothy’s parents — Dorothy grew up on a farm near Casco — kept their children close to their Catholic faith.

Both of them recall frequent family visits to the Shrine of our Lady of Good Help in Champion as far back as 70 years ago.

“I have pictures of 1934 model cars parked there,” Jim said.

He spent his professional life helping young people learn as an educator for 38 years in school districts in Door County, Menominee Falls and Appleton.

Not surprisingly, Jim’s passion for everything plants led him to begin a program in Appleton where flowers adorn the borders of sidewalks at many schools.

When the Denils began volunteering at the St. Vincent de Paul Store, one of the first things Jim set his eyes on was a forest of high weeds hugging the outside walls of the store.

“When I came here the weeds were right up to your armpits in some places. I thought ‘Here is a place I can really enjoy my hobby,'” Denil said. “The appearance of the outside of a building is kind of a prelude to what is happening inside the building.”