That same night, the storm system that fueled the Chicago Fire also spawned the Peshtigo Fire. This series of blazes, firestorms and fire tornadoes was centered on the town of Peshtigo, a thriving lumbering center. The fire area reached to Upper Michigan to the north, down the Bay of Green Bay and even reached Waupaca and Manitowoc counties on the south, past Shawano County into Oconto and Marathon counties on the west and across Door and Kewaunee counties, only stopped by Lake Michigan. 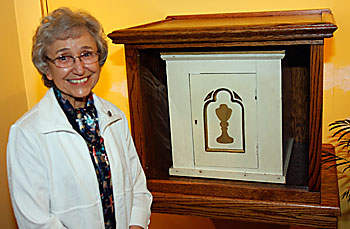 Notre Dame Sr. Helen Plum, parish director at St. Mary Parish in Peshtigo, stands next to the tabernacle that was rescued from the Great Peshtigo Fire by Fr. John Peter Pernin in 1871. The tabernacle was returned to Peshtigo around 1978, more than 100 years after being moved to various churches in the Green Bay Diocese. (Rick Evans | For The Compass)

Fr. John Peter Pernin was a Canadian missionary priest serving as pastor at St. Mary in Peshtigo and Our Lady of Lourdes in Marinette in 1871. Marinette and its neighbor city, Menominee, were also extensively damaged by the fire.

Fr. Pernin was in Peshtigo that night and only survived by spending more than six hours in the Peshtigo River. Two years later, he wrote about the experience in a memoir first called “The Finger of God is There” and now known as “The Great Peshtigo Fire: An Eyewitness Account.”

St. Mary Church was destroyed in the fire. However, racing ahead of the flames, Fr. Pernin was able to carry the church’s tabernacle, containing the Blessed Sacrament, to the river on his wagon. Finally, he had to push the wagon into the river and abandon it to save his own life.

The next day, a parishioner who had also survived found Fr. Pernin and asked if he knew what had happened to the tabernacle. The priest replied that he did not.

“Come quickly then, and see. Oh! Father, it is a great miracle!” The priest followed him.

“I hurried with him to that part of the river into which I had pushed as far as possible my wagon containing the tabernacle,” Fr. Pernin wrote. “This wagon had been blown over on its side by the storm; whilst the tabernacle itself had been caught up by the wind and cast on one of the logs floating on the water. Everything in the immediate vicinity of this spot had been blackened or charred by the flames; logs, trunks, boxes, nothing had escaped, yet, strange to say, there rose the tabernacle, intact in its snowy whiteness, presenting a wonderful contrast to the grimy blackness of the surrounding objects.”

Fr. Pernin left the tabernacle where it had been found for two days, “so as to give all an opportunity of seeing it. …. The Catholics generally regarded the fact as a miracle, and it was spoken of near and far, attracting great attention.”

After he had seen to the burial of victims — many of the graves are on the grounds of the Peshtigo Fire Museum today — Fr. Pernin returned to his church in Marinette, bringing the tabernacle with him. He wrote that the contents of the tabernacle — the Blessed Sacrament, monstrance and ciborium — were untouched. Even the silken cloth inside the tabernacle was spared.

Fr. Pernin, who died on Oct. 9, 1909, in Rochester, Minn., left the tabernacle at Marinette. However, he remained fond of the relic.

“These sacred objects,” he wrote, “though possessing in reality but little intrinsic value are nevertheless priceless to my eyes. I prize them as precious relics and never look at or touch them without feeling penetrated with sentiments of love and veneration such as no other holy vessels, however rich and beautiful, awaken within me.”

Bishop John Grellinger’s curiosity was piqued, but it wasn’t until 1976 that he began an earnest search for Fr. Pernin’s relic. The trail led from Marinette, to Holy Cross Parish in Kaukauna, to St. James Parish in Amherst (now in the La Crosse Diocese) and finally back to Peshtigo.

In an August 1976 oral history, long forgotten in the diocesan archives, Bishop Grellinger can be heard going over the trail of the tabernacle with Msgr. John Gehl. Msgr. Gehl (who died in 1979) was known as an avid diocesan historian and had written a number of parish histories. He had also served as pastor at St. James Parish in Amherst from 1922 to 1924.

Msgr. Gehl had succeeded Fr. Andrew Quella at St. James. As the monsignor recalled, Fr. Quella had been assistant pastor at Holy Cross in Kaukauna when he was assigned to be pastor at Amherst in 1920. Fr. Quella then brought the Peshtigo tabernacle to Amherst from Holy Cross. Msgr. Gehl said that the tabernacle had been at Holy Cross because the pastor there, Msgr. Peter Lochman had brought it from Peshtigo. Msgr. Lochman had been pastor at Peshtigo from 1900 to 1904 and, when he left, took the tabernacle because “he was afraid that no one would appreciate it” if he left it at Peshtigo. Msgr. Lochman gave the tabernacle to Fr. Quella.

Msgr. Gehl further noted that Fr. Edward Le Mieux, a priest-son of Our Lady of Lourdes Parish in Marinette (Fr. Pernin’s old parish), confirmed to Fr. Quella that the tabernacle was the same tabernacle he had seen as a boy growing up in Marinette. Fr. Le Mieux was born in 1890.

So the trail of the tabernacle, according to Msgr. Gehl was thus:

• from Peshtigo to Marinette (with Fr. Pernin);

• from Marinette to Kaukuauna (with Msgr. Lochman);

• from Kaukauna to Amherst (with Fr. Quella).

Fr. Quella’s church in Amherst was struck by lightning in 1949, just as the present church was being built.

And what of the tabernacle?

Bishop Grellinger was determined to find it. He travelled to Amherst in 1976 and, with the help of the pastor and parish members Albert and Katie Krutza, located an old tabernacle in the sacristy “on top of a high vesting case.”

Bishop Grellinger, describing his search in The Spirit newspaper (predecessor to The Compass) in 1976, described the tabernacle as “a rather crudely made box” with a gilt-painted chalice on the door “which had lost all its luster and appears as dull brown.”

In an October 1976 letter to Bishop Grellinger, Mrs. Walter Konkle, who had been sacristan at Amherst from 1945 to 1973, confirmed that her husband had painted the tabernacle and the chalice on the door “sometime between 1949-1951.”

The tabernacle was returned to St. Mary in Peshtigo at the request of Fr. Michael Clifford a few years later. As recorded by the Peshtigo Times in 1984, when Fr. Clifford was named pastor at St. Mary in 1978, he requested the return of the tabernacle. Fr. Robert Pedretti, pastor of St. James in Amherst, agreed.

“I was wondering why — if they knew it was the Peshtigo tabernacle — they hadn’t returned it,” Fr. Clifford recalled for The Compass. “They said that no one had asked them.”

So the tabernacle finally came home. Today, St. Mary Parish in Peshtigo again has the tabernacle during most of the year. Sr. Helen Plum, parish director, said the tabernacle is kept in a special room next to the sacristy.

“We set up the altar there and it becomes the chapel of repose for prayer,” she told The Compass. “It makes that connection of faith between the people (of today and the past). You need to preserve that history of faith.”

Inside the tabernacle are sacred vessels, but they are most likely not Fr. Pernin’s. Fr. Clifford remembers that the tabernacle was empty when it was returned from Amherst.

Msgr. Gehl, in his oral history, was adamant that the ciborium and monstrance inside the tabernacle at Amherst had belonged to the Amherst parish long before Fr. Quella’s arrival in 1920. Msgr. Gehl believed those vessels had come from St. Peter Parish in Oshkosh, which had donated many items when St. James was founded in 1905.

During the summer months, the tabernacle at St. Mary is loaned to the Peshtigo Fire Museum, which is located on the site of Fr. Pernin’s church in Peshtigo. The building was moved to the site in 1927 after the rebuilt St. Mary Church had again been destroyed by fire.

The present St. Mary Church is located at 171 South Wood Ave., about a quarter mile southwest of the old church site. The Fr. Pernin tabernacle can be seen there during the winter months.