But, he quickly added, “Don’t worry. You’ll still see me around. I’m not done singing yet. I’ll still be singing with them as a member of the choir, just not as the director.” 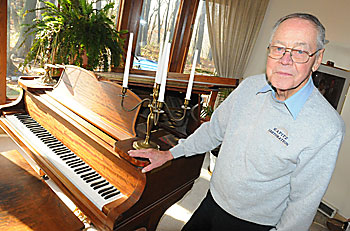 Joe Mader, who recently assumed the role of director, said it’ll be a challenge following in Kapitz’s footsteps.

“I’ve got a great deal of admiration for Arnie,” said Mader, 62, a member of the choir for the past 20 years. “He’s the man most responsible for building the choir into the organization it is today. He kept it going over all these years, and he kept the bar raised high. I’ve got some big shoes to fill.”

To which Mader added with a laugh, “I was going to try to shoot for 58 years to break Arnie’s record, but I don’t think that’ll happen.”

Kapitz will be honored during the 9:30 a.m. Mass on Dec. 4 at the St. Francis of Assisi-Waldo location.

Kapitz said the reason he joined the choir in 1954 wasn’t exactly divine intervention.

“My father-in-law wanted me to join the choir, and he said he’d give me a cigar if I went with him to rehearsal,” Kapitz said with a chuckle. “I wanted the cigar, so that’s how everything got started.

“We got to the choir that day and they were singing the St. Basil Hymnal and they were all singing in unison. So I start singing baritone notes and they looked at me like, ‘This kid is nuts. What is he doing?'” said Kapitz. “They had a meeting the next day and they wanted me out so they made me the director.”

The next day he was told: “‘Hey, we’ve got a great new job. We want you to be director of the choir.’ I said, ‘What does that entail?’ They said, ‘Oh, it’s no problem, you just keep waving your arms until the music stops.’

“And that’s what I’ve been doing for 57 years,” added Kapitz.

Kapitz’s tenure as men’s choir director began at Holy Innocents Church in Manitowoc. The job morphed into the St. Francis Men’s Choir director in 2005 upon the establishment of the newly organized St. Francis of Assisi Parish. Over the years, Kapitz directed 192 choir members.

Currently, the St. Francis Men’s Choir has about 40 members, including Ann Lensmire, its longtime organist. The choir rehearses every Wednesday and performs the first and third Sunday each month. Kapitz said the choir has performed all across Wisconsin as well as at churches of other denominations.

“One time we made a CD of our songs and sent it to the pope, and he sent a thank you letter back,” Kapitz said.

Kapitz said music is an important component of the parish and community, in general. As a charter member of the Manitowoc Symphony Orchestra, who also spent more than 40 years with the Manitowoc Marine Band, he knows what he’s talking about.

“Music has been a part of almost every organization you can think of,” he said. “I feel that the music that comes along with the Mass, it adds to it and gets the people in more of a religious mood.”

Kapitz said he’s proud not only of the choir’s singing, but its accomplishments at the Waldo location, too. He said the highlights were remodeling a kitchen, building a club room, building a ramp for the disabled and building a choirloft extension.

Even though his days as a director are over, Kapitz remains busy.

When he’s not spending time with his wife, Shirley, he works for Cawley Company (he’s planning to retire there on his birthday, Nov. 18) and also owns Kapitz Restoration Service, which repairs clocks, pianos and slot machines.

“I’m too young to retire completely,” he said. “I’ve got some energy left in me still.”