It’s no surprise who football fans in the Diocese of Green Bay say is their favorite quarterback (hint: Discount Double-check). But there are more than Aaron Rodgers’ incredible athletic skills that make him a winner.

As most people in Packers country know, Rodgers is a man of intelligence, wit, high character — and he possesses darn good acting skills. But how many people know that Rodgers is a fan of St. Francis of Assisi?

During his weekly radio interview Nov. 29 with Jason Wilde on Milwaukee’s ESPN Radio affiliate, WAUK, Rodgers spoke about Tim Tebow and his public expression of faith. Read what Rodgers had to say about Tebow and how Rodgers expresses his own religious beliefs:

“Well I started playing before Tim, so these are things I’ve thought about for a long time, and I think one thing that I try to look at when I was a younger player, and I mean, in high school, junior college, and Division I, I was always interested in seeing how guys talked in their interviews, talked about their faith, or didn’t talk about their faith.

“And then the reactions at time, I know Bob Costas at one point was critical about a player thanking Jesus Christ after a win, questioning what would happen if that player had lost, or do you really think God cares about winning and losing. That’s all to say that I feel like my stance and my desire has always been to follow a quote from St. Francis of Assisi, who said, ‘Preach the Gospel at all times. If necessary, use words.’

“So basically, I’m not an over-the-top, or an in-your-face kind of guy with my faith. I would rather people have questions about why I act the way I act, whether they view it as positive or not, and ask questions, and then given an opportunity at some point, then you can talk about your faith a little bit. I firmly believe, just personally, what works for me, and what I enjoy doing is letting my actions speak about the kind of character that I want to have, and following that quote from St. Francis.’’

There’s another reason to cheer for Rodgers, an MVP in more ways than one. If you’d like to listen to the entire radio interview with Rodgers, go to this link.

UPDATE: Someone passed along a link to another story about Aaron Rodgers and his Christian faith. Here’s a snippet:

“I grew up knowing what a stable relationship was by my parents’ example and how it centered on Christ,” Rodgers says, “When our family had its ups and downs, I knew my parents relied on God for everything and He always got us through those rough spots.”

Read the entire story from Athletes in Action here. 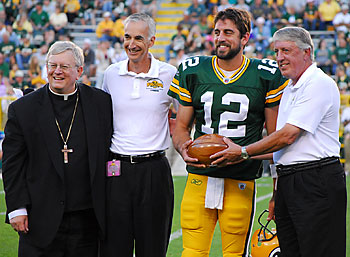 Bishop David Ricken, left, Denis Hogan and Jerry Pigeon present Green Bay Packers quarterback Aaron Rodgers with the Most Valuable Player award for his performance in the 2009 Charities game prior to last year’s Bishop’s Charities Game at Lambeau Field.(Renae Bauer | For The Compass)