“I also do a lot of funerals,” he said. Though he is Catholic and has a deep affection for this tradition, he has to be flexible. “I deal with all different faiths and traditions. A lot of times, funerals are not connected with a church. I’m seeing more and more of that. I hate to see that,” he said. 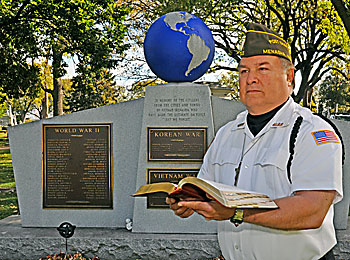 “Some of the (veterans’) funerals are very hard. It’s the final thing in their military career. The hardest of all are those who die while serving in active duty.”

Thiede doesn’t limit his services to his own post. He serves as a district chaplain and travels all over the state. He is available to all veterans, for any VFW post or the AmVets, American Legion or for those who don’t belong to an organization.

“A veteran is a veteran,” he said. “I carry my Bible in the car so I can carry it anywhere. If I get a call, I drop everything and go,” he said.

Thiede grew up in Menasha, graduated from St. Mary Central High School and then was drafted into the Army. When his stint in Vietnam was finished, he went to the Blessed Sacrament Fathers’ minor seminary in Barrie, Mass. He became a brother in the order and eventually returned to Menasha to teach.

While in Menasha, he left the religious community because he struggled with “church politics,” he said. He worked at Miller Electric, Appleton, for 33 years.

While dealing with health issues related to Agent Orange, “I learned that I had a mission to help others,” he said.

And, that is what he does. He might be at the Menasha Post cooking dinner for the 150-160 VFW members, or visiting the relatives of a veteran he recently buried. He might be working a fund-raiser, such as a brat fry or poppy sale.

Or, he may be helping out “Beaming.” This horse therapy program, located in Neenah, has several programs to serve both children and adults, including a special program for military veterans called “Horses, Hearts, and Heroes.”

The VFW Post members vote for a chaplain. Thiede likely got his position because of the religious training in his background and he doesn’t hesitate to use it. On Memorial Day, for example, he might write his own prayers for a service.

As a chaplain, he listens and counsels troubled members and their families. “These men don’t speak of their war experiences often, but when they do, I listen,” he said. He continues to visit families after they have buried loved ones because “they hurt so bad.”

Thiede is a big believer in camaraderie. “I try to get everyone involved. A group of guys (or gals — women veterans are welcome) coming together to hash things out is what it’s all about,” he said.

In addition to helping veterans and their families who are in financial trouble, the veterans’ group also financially supports community groups and agencies, such as the Salvation Army, youth groups, St. Vincent de Paul and others, Thiede said.

“So many of our guys do so much. They don’t boast about it. If a family is hurting, we go talk to them or help with their bills. All the money we raise goes back to families or to the community.”

There is also an education component in their work. Thiede speaks at schools and other groups. “If we don’t remind people of what we’re all about, no one will,” he said. “We go into the schools and tell our stories.” He says the country needs to listen to these veterans talk about the fight for freedom. “We don’t want people to take our freedom for granted,” he said.

Speaking of the Vietnam era, he said, “When we came home, we were spit on. We weren’t given a hero’s welcome. A lot of Vietnam vets have anger from that time. We try to heal that. But, we also try to get the facts out so history doesn’t repeat itself.”

Finally, the organization is also about honoring heroes, the chaplain said. His post is proud of its two Medal of Honor winners.

“Abraham Lincoln said, ‘Any nation that doesn’t honor its heroes will not endure.’ That’s what we need to do — honor our heroes,” Thiede said. “As a group, we try to help people see a light at the end of the tunnel.”