ST. NAZIANZ — Like the Old Testament tale of the Israelites wandering in the desert for 40 years, the monks of Holy Resurrection Monastery have their own nomadic tale. It even includes a Moses who helped lead them out of the desert.

Last month, five monks who are members of the Eastern rite Catholic Church arrived at their new monastery in St. Nazianz. The three-story structure, originally a convent, offers enough space for the community to grow and to welcome guests from around the Midwest for retreats and worship.

“We are a new foundation of a very ancient tradition in the Eastern Catholic Church,” said Abbot Nicholas Zachariadis, leader of the monastic community. “We began about 17 years ago and we had a home in Newberry Springs,” located in the western Mojave Desert in California.

“It proved to be too remote,” he said. “We wanted to be more of a people’s monastery.”

According to Abbot Nicholas, the monks were invited by Cardinal Francis George to relocate in the Archdiocese of Chicago, but they could not find a suitable home. The vacant church buildings were too large for the small community, he said, “so we lived for three years with a Benedictine community in Valyermo, Calif.” 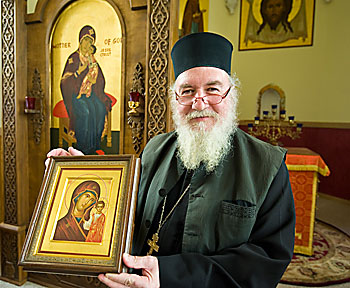 Abbot Nicholas Zachariadis, one of five monks now residing at Holy Resurrection Monastery in St. Nazianz, holds an icon of the Blessed Mother and child Jesus.(Sam Lucero | The Compass)

During that time, the monks continued searching for a new home.

Finally, last year, one of the monks, Fr. Moses Wright, came across Maria Haus — formerly St. Mary Convent in St. Nazianz — while doing an online search for church property. “So we came and looked at it and we liked it,” said Abbot Nicholas.

He said Bishop David Ricken was enthusiastic about the monks moving to the Green Bay Diocese.

“Bishop Ricken extended his invitation for us to come and made us feel very welcome,” said Abbot Nicholas. “He’s very enthusiastic about our presence and ministry here, so his support is important.”

Abbot Nicholas, a monk for 31 years, and Fr. Maximos are from Australia. Before joining the community, Fr. Maximos was a solicitor in a large commercial law firm in Sydney from 1990 to 1994, when he became a monk. Fr. Moses was a professional chef in New York. He developed an interest in Eastern-rite churches while he was employed as a private chef on a yacht owned by a wealthy Greek. A monk since 1994, he now prepares meals for the community. Fr. Basil, who joined the monastery in 1995, and Br. Mark, who entered the monastery in 2007, are Midwesterners.

The vestments worn by the monks of Holy Resurrection Monastery identify them as members of the Eastern Catholic Church. “Informally, monks wear a black tunic, belt, vest and skufos, from which the zuccetto derives in the Latin tradition,” said Abbot Nicholas. “Formally, a monastic hood is worn on top of the skufos and a garment with long sleeves (exo-rason) and sometimes on top of that a pleated cloak, called a mandyas.”

When it was established in 1995, the monastery was part of the Ruthenian Byzantine Catholic Eparchy (diocese). In 2005, it received approval from the Holy See to be under the jurisdiction of the Romanian Catholic Eparchy of St. George, headquartered in Canton, Ohio.

“The Byzantine rite, both in the Orthodox Church and the Catholic Church, is probably the most influential rite after the Roman rite,” said Abbot Nicholas. Within the Byzantine rite, there are different ethnic communities, including Romanian, Greek, Russian, Ukrainian and Melkite rites. “It’s just different ethnic adaptations, just like the difference between Polish Roman Catholics or German Roman Catholics,” he said.

The Byzantine rite maintains close links to the Orthodox Church, the latter of which is not in full communion with the Roman Catholic Church because it does not acknowledge the authority of the pope. “The prayers are the same (in the Eastern Catholic and Orthodox Church), but we mention the name of the pope,” he said.

Abbot Nicholas said that worship in the Eastern tradition is very visual. “In the Latin church, the emphasis is much more on hearing — the poetry of the Latin or the English and the music,” he said. “But in the Byzantine tradition, the visual is very important. The icons, the church architecture and so on.”

When it comes to liturgical celebrations, the monks follow the Julian calendar instead of the Gregorian calendar used by the Roman Catholic Church.

“We don’t have Advent. We have a pre-Christmas period,” said Abbot Nicholas. “We follow the same Easter date as the Orthodox, so the past two years it’s been the same as the Roman Catholic Church, but next year it will be a week after and the year after it will be something like five weeks after.”

Holy Week is the highlight of their liturgical year, he said.

“We really celebrate the resurrection in a very in-your-face kind of way,” said Abbot Nicholas with a smile. “‘Christ is risen,’ we keep saying. ‘Indeed he is risen.’ You’ll hear that again and again and again.”

With boxes yet to unpack, Abbot Nicholas said the monks are eager to settle into their new home. It’s especially significant to land in a community named after a father of the Eastern Catholic Church, St. Gregory Nazianzen.

Abbot Nicholas noted that the roots of St. Nazianz go back to 1854, when German pioneers, led by Fr. Ambrose Oschwald, founded the village. The monastery was originally the convent for the Oschwald sisters in the 1850s and later for the Sisters of the Divine Savior.

“So we’re carrying on a tradition here that’s already existed for (more than) 140 years,” he said. “That continuity is very important to us. The local community and even the diocese are very enthusiastic about a religious presence here again because it has a wonderful history.”

The abbot said he wanted to reassure members of the Green Bay Diocese that “we are Catholic and that we are here with the enthusiasm of Bishop Ricken.”

Abbot Nicholas said that the Catholic and Orthodox churches have a common desire to promote religious values.

“We are living … more and more in a secular culture, especially in Europe and the U.S.,” he said. “I think it’s extra important these days for us Catholics and Orthodox who have common apostolic roots to share our treasures and form an alliance to combat a very rigorous opponent in secularism. I think we are going to need the resources common to the whole church, both East and West, to succeed in addressing this challenge to Christianity that is certainly prevalent in the developed world.”

Abbot Nicholas said the monastery wants to offer retreats and days of reflection to the community. “We hope to have Saturdays as days of pilgrimage and reflection,” he said. “Most Saturdays we hope to have groups of anywhere between 10 and 50 people who will come for the day to celebrate liturgy with us; Mass in the morning and lunch. We can show them around and explain to them about our tradition. Then they can stay for vespers.”

He envisions groups from parishes, such as RCIA groups and Knights of Columbus, as well as college students or faculty members spending days of reflection at the monastery. “I think they will hopefully deepen their spiritual life and, of course, we will be carrying out an apostolate.”

Rest assured, he said, that Roman Catholics can partake in the sacraments of holy Communion and reconciliation.

“We normally do it not in a confessional box but in front of the icon of Christ and the priest stands because we make a confession to him,” said Abbot Nicholas. “And the formula for forgivness, for absolution, is a little bit different. But apart from that it’s the same.”

For more information about Holy Resurrection Monastery, visit their website.