“The attitudes we have now were formed in childhood,” he said. “What was the worst thing you could be called as a boy? A wuss? A sissy … We are telling boys that they need to be certain kinds of men and girls are less. We need to change that.” 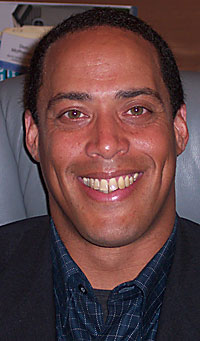 The insults are not just between peers, said McPherson. Fathers demanding that their sons meet the masculine stereotypes are guilty of using similar putdowns.

It comes from some fathers — and coaches think they can use it to motivate a player,” he said. “When the coach wants the athlete to be tougher, show more intensity, what does he often do? He insults his manhood and degrades women in the process. If you say ‘you throw like a girl,’ that’s what you are doing. I’m not going to make my son better by degrading my daughter. If your only tool is a hammer then everyone becomes a nail.”

In 1994, following stints in the NFL and CFL, McPherson retired from football. He was hired by Northeastern University in Boston as its national director of Athletes in Service to America. While at Northeastern, he met Jackson Katz, who co-founded Mentors in Violence (MVP) a program designed to recruit male athletes to confront violence against women. Through his work with Katz, McPherson developed his platform. Today, the former All-American, now 46 and a married father of two, identifies himself as a feminist and advocate for women’s rights.

“As men, we need to be part of the solution,” said McPherson. “We need to work on making good decisions with good information. Look at a football team that is executing a winning drive at the end of the game. They train for that situation. We need to train for situations in life.”

Open lines of communication in families are essential, said McPherson.

That was not the case in his household while growing up in West Hempstead, N. Y.

“My mom was a nurse and my dad a police officer,” he explained. “The McPherson family was well-known in the community. People would look at us and say, ‘Oh, that’s a sharp family. They have it together.’ The truth was I had an uncle, who I thought was the cool uncle, but he abused alcohol. My grandfather was an alcoholic. He died in a drunken driving accident. I didn’t know about how he died until I was in college. We didn’t talk about those things.”

“Through conversation we can identify things before they happen and that conversation needs to be honest,” he said. “The only time we talk to men is after the fact. We as men have to be a part of the conversation. We have to confront language and attitudes.”

Narrow views of masculinity also lead to women being viewed as objects, said McPherson. He presented a scenario to the audience where a man goes outside with a woman he just met.

“What do you think his friends asked him? There is an assumption that something happened,” he said. “Would you assume that something was going to happen if you were in that situation? We make bad decisions in relationships because we make assumptions of what we are supposed to be doing. You devalue women with that attitude. You abuse their rights, their feelings and are more likely to be silent when you abuse them. What does silence say about language and attitudes? That it’s OK. It validates my attitude.”

McPherson, who was enshrined into the College Football Hall of Fame in 2009, encourages young people to find examples of good relationships. He warned against the messages being conveyed today on television and through music.

“There is an absurdity of violence in some of the music,” he said. “I was a football player so I get it, the music in the locker room is designed to get you ready for the game. Think about it though; 99 percent of those guys listening to those violent lyrics are going out on a date after the game. It’s selling more and more sexualized attitudes and more and more violence.”

“Continue the conversation,” he said. “It’s at the core of where we are as people. Number one is how we love each other and how we listen to each other.”