In his sermon, Deacon Umentum, also a secular Franciscan, talked about the different orders of the Franciscans. “It was the first time I had heard about a third order,” said Gumz. 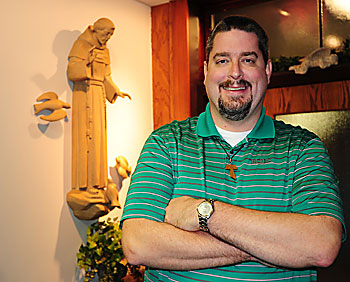 A few weeks after that Mass, Gumz was on a retreat with Deacon Umentum, learning more about the spirit of St. Francis. He soon became a regular at the monthly secular Franciscan meetings held at St. Mary and entered into formation. In 2007, he made a public profession as a permanent commitment to the Gospel way of life.

“The things that really attracted me to St. Francis were simplicity, poverty and humility. Especially humility as I strive to be that humble person,” Jeff told The Compass.

The Third Order Franciscans have around 25 members in Green Bay. It is a worldwide lay movement with more than 30,000 members in the United States alone. Jeff was quick to explain that this is not another church club but rather a calling to live the Gospel inspired by the vision of St. Francis. For him, this means being a witness of the good news at Green Bay East High School, where he has taught U.S. history and psychology since 1999.

“I always try to exemplify that famous quote of St. Francis to preach the Gospel at all times and if necessary use words. At the high school that means being an example to the young people that I come across every day as a teacher,” he said. “If one of the kids comes up and feels comfortable talking to me about things, then I feel that I need to be there for them.”

Being an attentive listener and being open to dialog are also two traits of Francis that Jeff tries to emulate in his daily life. One of his favorite stories of St. Francis was when he met the Muslim sultan during the era of the Crusades.

“Did they convert each other? No. But Francis came away with a better respect for Muslims as he came to appreciate their five times of prayer each day,” Gumz explained. “They had dialogue and conversations. And that is what we are called to do: to listen and bridge these gaps we have in our society.”

In the end, Gumz sums up his life as a secular Franciscan as one in which he feels much closer to God.

“We go from Gospel to life and life to Gospel. I have a beautiful rule (of life to follow) and fellowship within a fraternity to guide me along my life’s journey,” he added. “I think my prayer life has grown and I continue to strive for a life of humility and charity.”