Impressive playoff run ends for Allen and the Tritons

Among the catalysts was quarterback Paul Allen who used both his arm and legs to help the Tritons win two road playoff games and upset a number one seed. The team took a simple approach, said the senior signal caller. 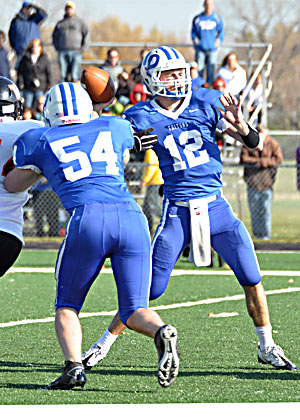 “We were pretty relaxed,” said Allen. “We just wanted to take it game by game; worry about the next game and play the best we could.”

Allen threw two touchdown passes in an opening round playoff victory at Northland Pines. He ran for two scores in both the second round against top-seeded Mosinee and in a level 3 victory at West Salem.

Miller, a first team all-conference running back, suffered a foot injury in the second to last week of the regular season. He was limited to only one playoff carry. Allen credits his teammates for stepping up. He pointed to the play of the offensive line and senior running back Alexander Lech who rushed for more than 600 yards in the three playoff wins.

“Coach (John Nowak) said at one point of the season that a lot of us learn how much we can play through, how much we can tolerate and how tough we can actually be,” said Allen, who also started at safety for the Tritons. “Everybody just picked each other up.”

Allen, who also plays baseball for Notre Dame, didn’t set any individual goals prior to the season. The Tritons are primarily a rushing team, so he focused on running the offense.

“I just wanted to make sure that I was a good leader,” he said. “I wanted to take care of my responsibilities. We definitely worked hard during the off season with weightlifting. A lot of the guys came in during the winter and we would throw passes before school. We wanted to do whatever we could to get better. We knew coming in that we had potential.”

The season got off to a rough start for Notre Dame. Conference champion Manitowoc Lincoln defeated the Tritons 41-7 in the opener. The team remained positive, said Allen.

“We were disappointed by how we played, but on the positive side, we saw how much potential we had because the mistakes were all correctible,” he said. “The physical effort was there. We just had to continue to bring that and the mental stuff eventually worked itself out.”

Even though Allen directed the offensive huddle, he said his leadership at quarterback was more by example than at safety.

“On defense, you have to be a louder vocal leader,” he said. “On offense, it’s a little bit calmer. I just try to do my job, whatever is asked of me that game.”

“That was quite an honor,” said Allen, who was surprised by the award. “To be seen as a leader by everyone else and someone who shows good sportsmanship meant a lot to me. I think that comes with the territory of being a quarterback, on and off the field.”

Notre Dame finished the season 8-5. Allen, a graduate of St. John the Baptist School, Howard, said sharing the experience with his classmates stands out.

“It’s been fun,” he said. “We have a big senior class (on the team) and we are all pretty close. A lot of us played last year, starting on the varsity. We will miss it.”