The Norbertines hold the general chapter every six years. The 2012 meeting will mark only the second held in the United States. St. Norbert Abbey also hosted the 1976 general chapter. The event was much smaller at that time, so the abbey facilities accommodated all guests. 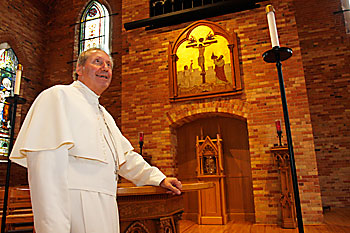 Norbertine Abbot General Thomas Handgrätinger is pictured inside Old St. Joseph Church on the St. Norbert College campus during a visit to De Pere last week, in preparation for the worldwide order’s general chapter next July at St. Norbert Abbey. (Rick Evans | For The Compass)

Abbots and delegates from all Norbertine abbeys, priories and houses will attend next summer. Representatives of the Norbertine sisters and lay associates have also been invited. The Norbertine order has approximately 1,400 members worldwide.

The abbot general is no stranger to northeast Wisconsin. He has traveled to De Pere for special visits, elections, jubilees and funerals over the years.

“The 1976 chapter was my first chapter and my first visit here. I started here and will finish here in the states,” he said with a laugh.

He has even made his way to two games at Lambeau Field.

“I was very impressed with the energy,” he said. “The game itself is a little different. I’m more of a soccer fan. Each time I was there, the Packers won.”

A Norbertine abbot general must submit his resignation at the time of his 70th birthday. Abbot General Handgrätinger was born in 1943, during World War II, in Ulm, Germany. His childhood was extremely challenging, he said. His father died in the war and his family was very poor. A teacher introduced him to the Norbertines. He entered Windberg Abbey in Bavaria in 1963 and was ordained in 1969 in Regensberg. He was elected the 46th abbot of Windberg in 1994 and the 64th abbot general of the order in 2003.

His first general chapter as abbot general was in Bavaria in 2006. He said that he is impressed with what St. Norbert College has to offer.

“I have the feeling that this is a very good choice, a good place,” he said. “My first was in Germany so it was easy to handle. There are so many good co-workers and cooperators for this that I have no doubts and no fears that it will be a good event.”

Norbertine Fr. Dane Radecki, pastor of St. Agnes Parish in Green Bay, is serving as the secretary of the general chapter. He has formed a secretariat, a team which is organizing the event. Fr. Radecki also chairs the planning committee.

“We’ve had meetings the last two years in Europe to propose the agenda and the structure of the chapter,” he explained. “Then we met with the abbot general and his council, the definitory.”

De Pere was recommended as the location at the 2006 general chapter. Four years ago, Norbertine Abbot Gary Neville gave Abbot General Handgrätinger a tour of the campus for his approval. Norbertines from St. Norbert Abbey have been very involved in past chapters and will be again at the 2012 event. St. Norbert Abbey and St. Joseph Priory, located on the St. Norbert campus, will elect delegates for the general chapter. Norbertine Fr. Robert Finnegan serves as the financial advisor, the provisor for the international order. Norbertine Fr. John Tourangeau is a member of the secretariat.

“The fraters are going to be helping,” said Fr. Radecki. “The associates of the abbey are very involved. They will coordinate all the transportation to and from the airport as well as a few other things.”

The college will serve as the primary location for the general chapter, but Masses will be celebrated at St. Norbert Abbey. Dialogue will be conducted in English and translated in five other languages, said Fr. Radecki.

Abbot General Handgrätinger is hopeful that a draft of a new constitution for the order is introduced at the general chapter. The last constitution is from 1968 to 1970.

“There is a commission that is working on this and they will give us their first ideas,” he said. “We will have to discuss it. We will not be finished at this chapter. My dream is to have the final by the next chapter, but we are starting the process now.”

Vocations will be among the discussions, he added. While some Norbertine houses are growing, others suffer from a lack of vocations. Abbot General Handgrätinger pointed to California, India and Africa as areas of significant growth. In addition to vocations, formation must be strong, he added. The abbot general believes the Norbertines have a strong program to build for the future.

“To live together in community is our strength,” he said, “and then to work outside to serve the people. Our mission is to help them on their way, to bring the people on their way to God.”

“Day of Pentecost” will serve as the motto for the general chapter.

“It is ambitious,” said Abbot General Handgrätinger, “but hopefully we will be inspired to build for the future, a new impetus to go out and bring this message to our houses.”