O’Leary launched his presentation — which was divided into three segments: From Anger to Love, From Fear to Faith and From Despair to Hope — with a call to action for the audience. He wanted each person to think, “What do I need to hear today?” He began telling the story from his father’s perspective of that fateful day more than 20 years ago, when he was a young boy “who had no courage and little faith.” 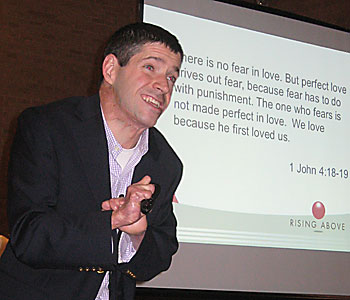 Inspirational speaker John O’Leary of St. Louis addresses Catholics in Appleton during a Nov. 10 presentation at Sacred Heart Church. O’Leary suffered third-degree burns as a result of a fire he started when he was 9. (Amanda Lauer | For The Compass)

One morning O’Leary’s father received a call at work saying their house was on fire and that John was burned. He raced home and when he saw the house in flames and several of his children on the lawn in need of medical treatment, he was enraged. Upon arrival at the hospital he immediately searched out his son so he could vent his anger about the damage he had caused.

When he stormed into his son’s room, his anger immediately turned to love. His son had third-degree burns over 87 percent of his body. O’Leary remembers the first words that came out of his father’s mouth. “Johnny, I’m proud of you.”

The family was told that John had less than 1 percent chance of surviving the first night. His body was so swollen that he couldn’t open his eyes, but the next day he received a visitor whose voice he immediately recognized: one of his childhood heroes, Jack Buck, the announcer for his beloved St. Louis Cardinals.

After Buck stepped out of the room, O’Leary recalled hearing him weep in the hallway and ask a nurse, “What more can I do?” a question O’Leary said will change things in anyone’s life if they ask it.

Buck visited O’Leary daily for the five months he was hospitalized and every time he left, he’d say the same thing, “Kid, you’re going to survive and when you get out of here we’re going to have John O’Leary Day at Busch Stadium.” In his mind O’Leary heard the voice of Jesus Christ through Jack Buck.

“People can change if they’re fighting for something bigger than themselves,” said O’Leary. That statement applied not only to his brother and sisters, whose courageous actions helped save his life the day of the fire, but to himself as he endured his time in the hospital.

The thought of being honored at a Cardinals game was enough to give him the will to keep fighting and when he was released from the hospital he did get to see his big day at the stadium, sitting in the press box next to Buck.

Because of his extensive burns, O’Leary lost all of his fingers. His parents wanted him to return to school but he wasn’t able to write. Buck stepped in again and gave the boy a baseball signed by Ozzie Smith, with the promise that if he wrote a thank you note, he’d get another signed by a different player the next day. That was the incentive O’Leary needed to start writing again and by the time he was through, he had accumulated a collection of 60 baseballs.

The 61st baseball was added to his collection when he graduated from college and Buck gave him a priceless gift — the crystal baseball Buck received from the Baseball Hall of Fame in 1987 for his major contributions to the sport. When O’Leary and his wife had their first child, they named him Jack, in honor of Jack Buck.

At the conclusion of the presentation O’Leary encouraged his audience to “be faith for others, be love for others and be hope for others.”

Donna Van Grinsven, a member of St. Mary Parish in Appleton, was drawn to attend O’Leary’s talk. “I need to ignite my faith more. He lifted my spirits. As a child I wasn’t burned … but there have been things in my life where I’ve had to turn to the Lord and my faith has gotten me through.”

Appleton East High School senior Tony Kaufman, a member of St. Bernadette Parish, got a lot out of O’Leary’s talk. “It was very moving. It was very inspirational.”

One thing that he walked away with was the concept of love. “There’s a certain love that you’ve got to feel for everybody. That’s going to stick with me the most,” said Kaufman.