Students show creativity in helping others learn about changes at Mass

After studying the revised prayers, the eighth graders found a creative way to share the changes with younger students: a puppet show. Following a script they wrote and using hand puppets and bed sheets as props, the eighth graders broke into small groups and visited classrooms. 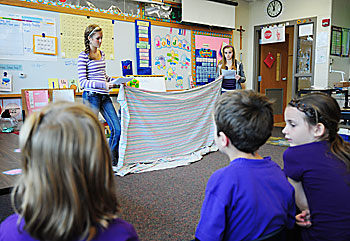 St. Bernard School eighth graders Olivia Watermolen, left, and Makayla Hansen read from a script about the upcoming changes in prayers at Mass during a presentation for first graders Nov. 22. The eighth graders used puppets to talk to students about changes in words they recite at Mass.

During a visit to Beth Henchek’s first grade class, Olivia Watermolen and Makayla Hansen served as emcees while Shannon Kaufmann, Megan Whitney and Eric Erb sat behind a curtain, using hand puppets to initiate conversation about the new words found in prayers at Mass.

Stephanie Rottier, middle school religious studies instructor at St. Bernard, has been working with the eighth graders on the project to introduce younger students to the Mass changes.

“We were trying to think of ways to reach out (to younger students) and the idea of puppets just popped into my head,” she said. “I said, ‘Let’s reach out to the whole school community and say, here are the changes. Here is what’s happening and here is how we are going to approach it.'”

Rottier said students learned about the revised Roman Missal and upcoming changes at the beginning of the school year. At first they were not eager to learn the new prayers, “but when they found out they could be part of this change and they can help make the change a little bit easier for everyone else, they were excited about it.” 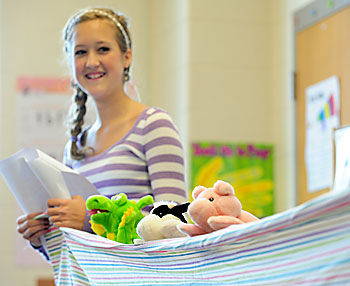 St. Bernard School eighth grader Olivia Watermolen observes as classmates use puppets to discuss the upcoming changes in prayers at Mass during a presentation for first graders Nov. 22. (Sam Lucero | The Compass)

Students took the time to study the changes and learn definitions of some of the words, said Rottier.

“Yesterday one of the students was looking up the word ‘begotten’ and another one was looking up ‘consubstantial’ and just trying to figure out what are those words and what are they trying to say in the Nicene Creed,” she explained. “That was huge. They were excited and just having fun trying to dissect those prayers and understand them better.”

When it comes time for Mass this weekend, Rottier said she believes children will find the changes easier to accept than their parents and grandparents.

“I think (children) will embrace it more because they are young and change doesn’t bother kids as much, sometimes, as adults,” she said.