Under new concealed carry law, churches must decide whether to allow weapons

“Bishop Ricken and the bishops of the State of Wisconsin have provided pastoral guidance on the conceal and carry law that delegates decisions to local leadership regarding the prohibition of concealed weapons in parishes and other buildings owned by the church and Catholic organizations. Our personnel policies already prohibit the carrying of dangerous weapons by employees and volunteers. Secondly, the legislation prohibits concealing and carrying on any school property. So, the big question will be whether parishes and/or Catholic institutions post signage prohibiting the carrying of concealed weapons on nonschool premises by non-employees. Each parish will have to evaluate the pros and cons of such a decision.” 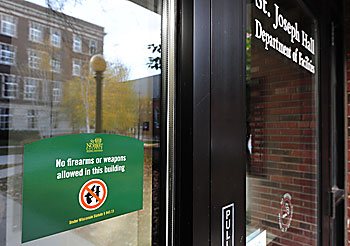 St. Norbert College in De Pere, like all other state and private colleges and universities in Wisconsin, has chosen to post signs on campus prohibiting the carrying of concealed handguns and weapons inside its buildings. The state’s new concealed carry law allows people with permits to carry concealed weapons inside most public places, including churches.(Sam Lucero | The Compass)

The edict, signed into law by Gov. Scott Waker last June, was opposed by the Catholic bishops of Wisconsin.

Last May, on behalf of the state’s bishops, Wisconsin Catholic Conference associate director Barbara Sella offered written testimony to a legislative committee drafting the law. “The presence of concealed weapons would help to undercut one of the primary objectives of religious institutions, namely the fostering of peaceful relations within the family and society,” wrote Sella. The WCC’s executive director, John Huebscher had also urged the Legislature to exempt churches from the law, just as government buildings and schools were exempted.

The new law allows licensed residents, age 21 and older, to carry several types of concealed weapons, including guns, electric stun guns, clubs and knives. It also allows employers and property owners, including churches, to prohibit concealed weapons from their buildings. However, signs measuring at least 5″ x 7″ must be posted at every building entrance.

Catholic colleges and hospitals in the Green Bay Diocese have opted to prohibit concealed weapons inside buildings on their property. Norbertine Fr. Jay Fostner, vice president for mission and student affairs at St. Norbert, told The Compass that St. Norbert, like the UW system and all independent state colleges and universities, has banned concealed weapons from its buildings.

“The law basically says that if someone is 21 and has a permit and has gone through training, they can bring a concealed weapon on campus,” said Fr. Fostner. “We can’t stop that. Certain institutions have the right to post signs that state those (weapons) may not be brought into buildings.”

He said the college had signs created and posted around campus, costing the school $3,500.

According to Steve Pelch, director of safety and security for St. Vincent and St. Mary hospitals in Green Bay, the Catholic hospitals have banned concealed weapons. Signs were posted at entrances of both hospitals last weekend, he said.

The Wisconsin Council of Churches, based in Sun Prairie, created a “Concealed Carry Information for Congregations” page on their website, www.wichurches.org, to help churches understand the impact on their congregations.

A memo posted on the website offers a list of provisions related to churches. The issue of liability is a concern for churches, according to the council of churches.

The council of churches encouraged their membership to “engage in a thoughtful process of discernment” on how to respond to the new law.

The Wisconsin Catholic Conference issued a “conceal and carry fact sheet” Oct. 31 that summarizes provisions of the new law. Like the council of churches, the WCC noted that the new law does not grant immunity for property owners or employers who ban concealed weapons. It added, however, that “the liability in question would generally be negligence.”

“While it is impossible to predict the impact of the new law on insurance rates in Wisconsin, the experience of other states suggests that the impact has been negligible,” the fact sheet stated.

Wisconsin-based Catholic Mutual Group, which serves more than 125 Catholic dioceses and 200 religious orders and institutions in North America, is recommending that parishes and church facilities bar weapons from their premises. It also advises its clients that a decision to bar weapons from their buildings will not impact the liability protection or the cost of coverage in the property and liability program.