Young people seem to handle change relatively easy. This is where they will have the opportunity to step up and say to their parents and grandparents, it’s not that bad, said Sarah Simon, campus minister at Xavier High School in Appleton. 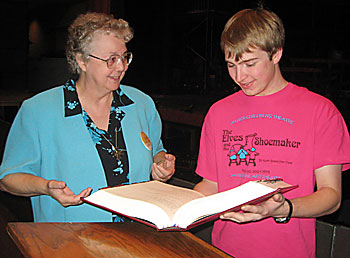 Sr. Ann Rehrauer explains to Brandon Verhagen, 17, a senior at Xavier High School, how the new Roman Missal, at 1,500 pages, weighs more than the old one with 1300 pages. The Roman Missal is the entire book of Mass prayers and readings approved by the Vatican. (Amanda Lauer | For The Compass)

Last week, Xavier hosted Sr. Ann Rehrauer, director of Evangelization, Living Justice and Worship for the Green Bay Diocese. She spoke to the student body about the upcoming changes in the missal and the Mass.

Sr. Ann addressed why the missal was changed, where the changes came from, how Mass will be different and what the students needed to do to prepare for this.

Essentially, the missal has been revised to more completely and accurately reflect the original Latin language. As a former teacher, Sr. Ann knew how to relate this message to the kids. She showed a quick-paced YouTube video that summed up the changes through the eyes of a teenager.

“What I liked about the YouTube video is it doesn’t say the other missal wasn’t good,” said Sr. Ann, a member of the Sisters of St. Francis of the Holy Cross. “It just says we can do it even better. This one isn’t perfect either but it’s as good as we can do now.”

The students learned from Sr. Ann a brief history of the Catholic missal, how Mass was celebrated when their parents were young, and why the decision was made to revise the missal. The text that the students had used their whole life was translated from Latin using “dynamic equivalence,” so it could be understood even by children. “But there was a growing tension about translation,” said Sr. Ann. “The Holy Spirit prompted the church leaders to look at this.”

The new missal was created using “formal equivalence,” in essence, a word-for-word translation. “This is the best possible English equivalent of Latin,” said Sr. Ann, who served as associate director of the Liturgy Secretariat for the U.S. Conference of Catholic Bishops in Washington, D.C., from 1996 to 2001.

“The fundamentals of Mass are not changing but this will bring a greater understanding of Mass and Scripture than ever before,” said Sr. Ann. “Mass will look the same but it can take on a whole new meaning for us.”

The Xavier students absorbed Sr. Ann’s message and had their thoughts on the changes. “I think it’s going to be slightly annoying at first and a bit challenging but the more we do it the more we’ll get used to it and accept it eventually,” said Brandon Verhagen, 17, a senior at Xavier. “It will be an easier transition for teenagers because change is easy for them.”

Since Xavier is such a close-knit community, refraining from holding hands during the Lord’s Prayer at Mass may be a little hard for them to accept said Verhagen. “I think it was neat and unifying when we did that at Mass and now we’re not going to do that anymore. It’s going to be like, ‘Hey, I’m sitting next to this person rather than interacting with him.”

Junior Jenny Andrysczyk, 17, is looking forward to the new missal. “I think it’s good that we’re going back and doing everything from Scripture. It’s a good change because now we actually have to think about the words instead of just saying them off of memory.”