“How old are you?” “Where do you come from?” “What are your hobbies?” The same questions flew back and forth between the sisters and the youngsters. 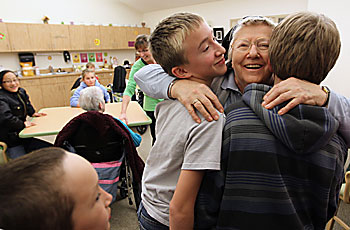 Sr. Mary Theresa Regler greets two members of the St. Raphael the Archangel Parish youth group as they arrive at Franciscan Courts Nov. 22 for an evening of making dog biscuits. The biscuits will benefit Father Carr’s Place 2B. (Jeannette Merten | For The Compass)

The sisters have been making the dog treats as a fund-raising effort for about two years, said Irene Hans, activities coordinator for Franciscan Courts, the retirement home of the Sorrowful Mother sisters. “We thought that would be a good fund-raising activity for them. It just seemed to fit in with the Franciscans and being good to the animals and all God’s creatures.”

She said the treats are sold at craft and bake sales at St. Raphael Church and at the front desk at Franciscan Courts. The sisters at Villa Loretta in nearby Mount Calvary often put in big orders, as well.

“Proceeds from them go to purchasing gift bags for the folks at the homeless shelter at Father Carr’s Place 2B,” Hans said.

The children had a grand time helping to mix the healthy recipe of whole wheat flour, peanut butter and skim milk. They helped to stir the ingredients, knead the mix by hand, roll out the dough and cut the treats out with cookie cutters. The treats are irresistible to dogs who love the smell of peanut butter, Hans said. Nemo, the resident dog at Franciscan Courts, loves them.

Hans said the project is always a lot of fun because the sisters have time to visit with each other and talk about how precious the dogs who will eat the biscuits are. 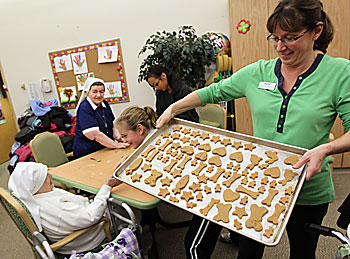 Irene Hans, activity director at Franciscan Courts, transports a pan of freshly cut dog biscuits to the kitchen to be baked. (Jeannette Merten | For The Compass)

“It’s kind of like a prayer shawl,” Hans said. “While we’re making them, we say some prayers for the dogs and the owners, for their safety and that they’ll take good care of the dogs. So they’re kind of like prayer biscuits.”

Two-ounce bags of treats are sold for $1.50 each, and this month’s project resulted in 55 bags.

Sr. Laetare Nieberle, 81, is one of the sisters who regularly joins in with the biscuit-making. She is originally from Germany, spent 53 years in New Jersey and five years in Broken Arrow, Okla. Most of her career was spent in food service, so she finds this project fun and interesting.

“I enjoyed very much working with the girls and boys,” she said. “Everybody is there together, and we made something for the dogs. It was fun, and the children asked me so many questions.”

Steve Weigand, middle school coordinator for religious education and youth ministry at St. Raphael, said, “Youth ministry does something different every month. In October, the first (outing) of the season, they worked at St. Vincent de Paul, cleaning shelves and putting together artificial Christmas trees. 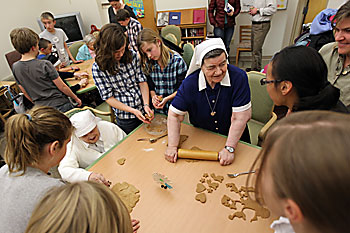 Members of St. Raphael the Archangel Parish’s youth group joined retired members of the Sisters of the Sorrowful Mother Nov. 22 to make dog biscuits at Franciscan Courts, the sisters’ retirement home in Oshkosh. The dog biscuits are sold to benefit Father Carr’s Place 2B. (Jeannette Merten | For The Compass)

“The kids wanted to do something more interactive this month, and we thought this would be a good way for kids to interact with the sisters. They were very interested, very excited, very enthused about learning (how to make dog bisquits) from the sisters and interacting with them personally,” he added.

Weigand said the students understand that by helping other people, “that strengthens their own self-esteem and gets them away from TV and media. As we enter this season of giving, it helps them begin to think of the needs of others.”