Suettinger, who was moved up to the varsity during her freshman year, was injured during a pickup game prior to her sophomore season. She had three teeth knocked out after being accidently struck by another player. Portions of her teeth needed to be extracted from her mouth. Suettinger, who estimates that she’s undergone at least 10 oral surgeries, persevered to average 8.6 points in 17 games as a sophomore. She would suffer another setback during the summer prior to her junior season. 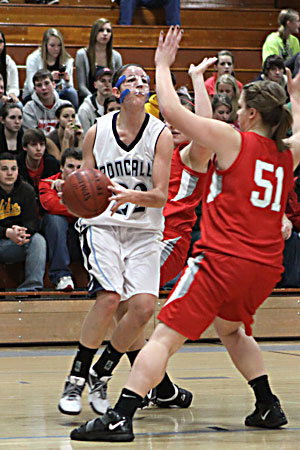 “I got an elbow to the face the last game of the Lincoln (summer) League,” she explained. “I was told that I could no longer play. I couldn’t take the chance. If I would get hit again, it wouldn’t be fixable.”

Sitting out was unbearable for Suettinger. She missed the first few games of her junior season before finding a way to play by lessening the chance for injury. She took the court wearing a protective mask, similar to the one worn by NBA veteran Richard “Rip” Hamilton. In fact, Suettinger’s mask is from the same manufacturer.

“I got used to it within a week,” she said. “Now it’s just part of who I am. That’s how people know me. I feel stronger having it on.”

Suettinger averaged 15.8 points per game last season and earned second team all-Olympian Conference honors. She not only overcame the physical challenges of wearing the protective mask, but also taunts from opposing fans.

“I would hear a lot of stuff from the student sections, but I would try to just ignore it,” she said. “They weren’t always nice. A lot of them would talk about how I broke my nose. They had no idea that it actually protected my mouth. People assume things and they really shouldn’t. They have no idea what you have to go through to come back.”

The Jets are hoping for bounce back season. The team finished 7-16 last year following a pair of 20-win seasons. Suettinger is the lone senior on the roster and embraces a leadership role.

“Since I was a freshman, we’ve had really good leaders,” she said. “My first year, the whole senior group showed me how to be a good leader. I was a captain last year, so I’ve had a lot of practice.”

At press time, Roncalli is off to a 3-1 start and is 2-0 in conference play. Suettinger plays all over the floor. She is the team’s tallest member at 5’10″, so she often guards an opposing post player. On offense, she is called upon to score and facilitate when she spells junior Catherine Taddy at point guard.

“I know that a lot of the girls look up to me for scoring,” said Suettinger. “It’s hard when I’m not having my best game, but it helps my teammates to step up and take that leader role when I’m gone.”

Suettinger added that she has a good relationship on the floor with Taddy following the tennis season. The duo competed in doubles at the WIAA Division 2 state tennis tournament. Suettinger played tennis for Roncalli as a freshman. She missed the fall sports season as a sophomore while recovering from mononucleosis. Her junior year, she ran cross country. In the spring, she competes in track and field.

Despite her busy athletic schedule and a part-time job at the family hardware store, Suettinger finds time for service at Roncalli, at St. Peter the Fisherman Parish in Two Rivers, and in the community.

“We have Lasallian Youth (service group at Roncalli),” she explained. “I try to get involved as much as I possibly can. I try to get my friends involved as well. It’s a great feeling knowing that you’re helping someone and knowing that you can make a difference in someone’s life just be helping them out a little bit. (Service) is one of my top priorities.”

Suettinger’s outreach includes raking leaves for those in need, assisting at youth athletic camps, working concessions at fund-raisers and participating in benefit walks. He parents, Chris and Vicki Suettinger, serve as role models. She assists her father in mowing grass and removing snow for two elderly neighbors and “My mom is extremely involved in everything,” she said.

One cause is especially meaningful for Suettinger. She helps with fund-raisers for Hayden’s Hope, which supports a 4-year-old girl who is fighting Batten’s Disease.

“I went to grade school with Amanda Thelen (Hayden’s sister),” said Suettinger. “It’s very personal for me and it was a priority to help her because we were so close.”

Volunteerism will continue in college, added Suettinger. She has yet to decide between three state schools. Her injuries have sparked an interest in dentistry as a potential area of study.

Suettinger is currently focused on enjoying her senior season and helping the Jets win. Her setbacks were part of the journey, she said.

“I believe that it’s made me grow stronger as a person,” said Suettinger. “It taught me to never give up, to go for your dreams and to try to hit your goals.”