“We thank God for the blessing of allowing us to have this beautiful painting here in this beautiful place,” said Fr. John Girotti, rector of the cathedral, who along with parishioner Andrew Opicka unveiled the painting, which hangs in an alcove on the south wall of the hospitality center. 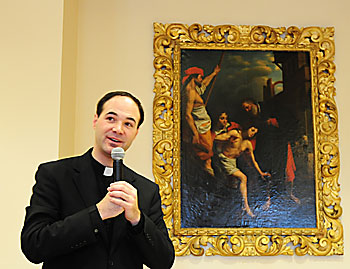 Fr. John Girotti, rector of St. Francis Xavier Cathedral, gives a brief history of St. Julian, who is depicted in the painting behind him. It is now on display in the Bishop Wycislo Center next to the cathedral. The painting is on loan indefinitely from the Green Bay and De Pere Antiquarian Society. (Sam Lucero | The Compass)

Carol Jones, a cathedral parishioner and a board member of the antiquarian society, offered a fascinating history of the painting’s origin and how it ended up in Green Bay. Fr. Girotti gave a brief history of St. Julian and what the painting depicted.

Jones explained that the antiquarian society purchased artwork, known as the Heritage Collection, from the Brown County Library in December 2007. “We purchased these assets that were going to be placed up for auction in New York because they were part of our heritage,” she said. “These assets were presented from the turn of the century, in the 1900s, by philanthropists of the day.”

At that time, the custom “was to place (treasured art) at your local library for all the community to enjoy,” said Jones.

Among the “treasure trove of wonderful pieces of art and historical artifacts” that the society purchased with funds raised from a community-wide $1.2 million fund-raising campaign was a 90-inch by 46-inch oil painting in an ornate frame, said Jones.

She explained that the painting’s origin could be traced as far back as the early 1900s, when it was purchased by Frederic G. Hall.

“(Hall) came to Green Bay in 1900 and bought the Beaumont Hotel,” said Jones. Hall’s background was in the hospitality industry, but he was also an art collector.

“He went to an auction in New York and purchased this painting, which was just known as ‘The Hospitality,'” said Jones. “It hung for a while in the Beaumont Hotel. It was also displayed at the Wisconsin State Historical Society and the Chicago Institute of Art.”

Jones said that Hall intended to discover the painting’s origin, but he passed away. “His estate gifted it to the Kellogg Public Library and there it remained for nine decades and no one knew exactly how, where or what it was all about,” she said.

After purchasing the painting in 2007, the antiquarian society began its research into the painting’s origins.

Under the supervision of art conservator Tony Rajer, who passed away earlier this year, the society contacted museums around Europe and the United States to ask for help in identifying the painting. A response came from the National Gallery of Art in Washington, D.C., which traced its origins to Florence, Italy.

“If you liked a favorite painting back in that time period, there weren’t any cameras … so someone would paint a copy as closely as possible,” she said. “They don’t call it a copy. They call it a version.” Only three other known versions are in existence, she said, one in a private collection, one in the Uffizi Gallery in Florence and one in the Museum of Cenacolo of Andrea del Sarto in Florence. “There also was a tapestry made of this exact painting somewhere in Italy.”

Rajer visited Florence in 2010 to view the original painting in the Pitti Palace. Jones said curators were amazed to see a photograph of the Green Bay version, particularly because it is housed in a rare Medici frame with gold-leaf gilding.

Jones said the painting was first on display at the Neville Public Museum in Green Bay. “But the society felt we wanted this to be out in public view and accessible to the community at large,” she said, adding that she knew the Bishop Wycislo Center would be an ideal location.

In describing St. Julian, Fr. Girotti noted that “part of (the story) is perhaps legend, but it speaks a little bit about why so many people felt drawn to this particular saint, especially during the Middle Ages. He was seen as a saint of hospitality, the patron saint of boatmen, the patron saint of travelers and a man who was very kind and faithful.”

According to Fr. Girotti, Julian, who was recently married, went out hunting one day. While he was gone, his parents, who Julian had not seen in a long time, arrived at his home. Julian’s wife invited them in.

“As the story goes, the mother and father were very tired, so the wife said, ‘Here you can sleep in our bed. I’m going to go off to church to pray and when my husband comes home I’m sure he will be glad to see you,'” Fr. Giroitti said.

When Julian returned to find two figures in his bed, he jealously mistook them for his wife and another man. He took his sword and stabbed them to death. At that time his wife returned from church.

“He said, ‘Who is in the bed?’ and she said, ‘It was your parents.’ It cut him to the heart,” said Fr. Girotti. “He was absolutely devastated. He decided then and there with his wife to live the rest of his life in penance, caring for those who were traveling. So we can see him here (in the painting) helping somebody traveling. … He spent the rest of his life caring for those in need.”

In the painting, St. Julian is depicted helping a young man from his boat, with two others assisting him. The legend concludes that St. Julian took the man, who was possibly a leper, to his home and put him in his bed. The man, said to be Jesus, became radiant with light and told Julian that his crime of killing his parents had been forgiven.