Parents served as models of faith

“My parents taught us that what you’re doing isn’t for yourself; it’s for God, and you’re living your life to the fullest for him,” she said. 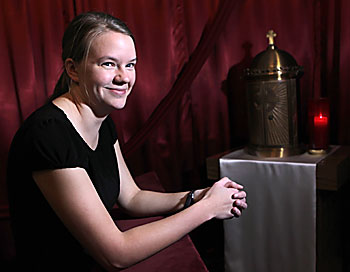 Pauly served her home parish by helping at festivals, doing Christmas decorating and serving as an extraordinary minister of holy Communion. “Small things like that,” she said.

When Pauly began attending the University of Wisconsin-Oshkosh, it was natural that she look immediately for a new parish. “Growing up, in St. Cloud, we went to 8 o’clock Mass every Sunday,” she said. “I needed a place to go to church to keep that up. I figured, ‘Why not go to a place where there are people my age involved and get to know a few people?'”

She found her new faith home at the campus Newman Center and she was active there for the four and one-half years she attended school.

“I was part of the Newman Council and Women’s Small Group, and I was a greeter and lector at Mass,” she said. “Getting involved with church is always a great thing. Being involved guides your prayer life and enriches it. It gets you deeper into your faith.”

Pauly graduated from UW-Oshkosh in January 2011 with a degree in finance. She now works full time as an accounting assistant at Georgia-Pacific and attends Most Blessed Sacrament Parish in Oshkosh. She finds that her free time is more restricted now, but she still gives back to her faith.

“Since I still live close to campus, I come back to the Newman Center for Tuesday dinners, small groups and other things,” she said. “It’s especially nice going back. It gives my faith life a home. Sometimes in my job, you can lose track of what life is all about. Going and seeing people who have that faith makes you want to learn more and continue on your path.”

She also has become involved at Most Blessed Sacrament. She lectors at Masses on Tuesdays and last summer she volunteered at both Father Carr’s Place 2B, which sponsors a shelter for the homeless, and the local St. Vincent de Paul thrift store.

“At Father Carr’s, I mostly answered phones and helped people find a place to stay for the night, depending on where they’re at,” she said. “At St. Vinnie’s, it was mostly putting clothes on the racks. Even at the Newman Center, we would take groups of people to Father Carr’s to work in the food bank or for one of the events that they had going on. They need all those people to make the organizations operate.”

Although her contributions may seem small, Pauly said she can see the importance of what she does, both for the organizations and for her relationships with other volunteers.

“The older people were just glad that we were helping, too, that the younger generation does still care,” she said. “It’s great to have that connection now between the parish and store and to get to know some people from the parish.”

She draws inspiration from two spiritual sources that help her connect to her faith in small ways. She often prays to St. Anthony, patron saint of lost things. She finds that encouraging others to do so provides an opening to more spiritual talk.

“This is one of the ways I connect with some people, even those who aren’t Catholic,” she said. “If they are missing something, I say, ‘You should pray to St. Anthony.’ They start questioning, and that gets the conversation going a little bit. It piques their curiosity about Catholicism.”

She also admires Mother Teresa of Calcutta, who lived a life of poverty and was able to help a great number of people. “The giving of herself to better other people’s lives is just inspirational,” she said.

“You’re much more grateful for the little things you do have,” she said. “It’s a reminder that even though we may not do something extravagant, the small things that we are doing can make a difference.”