Solidarity with the poor has guided Catholic Charities director’s ministry

“We are to do for one another what Jesus did. … Our work in the world must give hope for those for whom we care.” 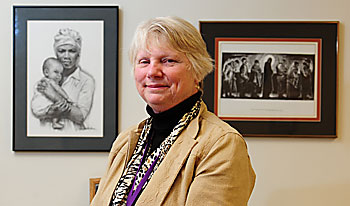 Karen Johnston, who experienced poverty as a child, has spent four decades reaching out to others in need. She is retiring as director of Catholic Charities for the Diocese of Green Bay on Dec. 16. (Sam Lucero | The Compass)

“I hope I’ve at least done a piece of that,” said Johnston, who has worked for 43 years in the church in the areas of social services. She says the ministry has been a matter of “measuring your success by the lives you change.”

But social service has really been a lifelong journey.

“I come from a strong family of faith. I grew up poor. Coming to Catholic Charities was coming full circle for me,” she said, her voice welling with emotion. “I get emotional. It’s been a journey.”

She was the youngest of seven children when her father, Michael, died and left her mother pregnant with her sister, Janet. Her mother, Pearl, had to go to work in a factory. People would bring them food and clothing, as well as gifts at Christmas time.

She first joined a religious community — Missionary Servants of the Most Blessed Trinity — that staffed Catholic Charities offices around the country. With them, she began her work in social service in Philadelphia, with summers in Brooklyn, and then to Rockford, Ill. When she left the religious community, Bishop Arthur O’Neill of Rockford asked her to continue working with Catholic Charities there.

“Rockford gave me a sense of commitment to life in the church,” Johnston said. “It was an extension in what I did in religious life. I was fortunate to have my faith and my professional career life and my passion for the work of the poor come together in this seamless tapestry. Every once in a while, the threads get frayed and you look at people who still fall through the cracks and the challenges for people who are poor,” she paused. “You know the whole philosophy of ‘everybody can pull themselves up by their bootstraps’? Well, you have to have boots before you can do that.”

When she arrived at the Diocese of Green Bay in 1997, Johnston came knowing that Catholic Charities is “the social arm of the church” that helps people at very difficult times in life: from loss to financial crisis to mental health issues and even natural disasters like Hurricane Katrina. Staff from diocesan Catholic Charities, including Johnston, assisted there, as well as in the aftermath of the Twin Towers on Sept. 11, 2001.

“The major benefit of this work is quietly seeing lives changed,” she said. “People’s lives are changed because of their interaction with our people.”

Part of her work these past 14 years has been seeing that the ministry of her department is recognized nationally, so people can be assured of the quality provided here.

“We have developed a quality assurance program that sets us apart from any other non-profit,” Johnston said. “People know that when they give money to Catholic Charities, they are changing lives. We can prove that every single day, with data, with information, with our clients and the stories they tell.”

Since her arrival, Catholic Charities has become accredited with the Council on Accreditation for Family and Children’s Agencies. Its immigration program is also accredited by the Board of Immigration Appeals, U.S. Department of Justice.

Other highlights of Catholic Charities under Johnston’s tenure:

• The reintroduction of an adoption program, for which she credits the groundwork to the late Kelly Richardson;

• The Financial Health Program, including budget counseling, which grew under the direction of Bobbie Lison, who now handles quality assurance for the entire department;

• The Family Strengthening Program. She said the model grew out of looking at the common factors in all the services Catholic Charities provides.

“They’re all about people and families. So we adopted the family strengthening model so people have a model for the delivery of care. … We start from the premise that at the core of everything we do is the family or the individual.”

As she faces retirement, Johnston thinks of her own family. She and her husband, Tom, have five children and seven grandchildren living in California, Minnesota and Illinois. Her family still resides in her native New England, and her oldest sister lives in Alabama. She and Tom — they’ve been married for “38 wonderful years” — also have one great-granddaughter, Ava Marie.

“My life has been very busy,” Johnston admitted. “My kids and my husband will tell you the price that has been paid for that is time lost with family. So (now) doing mindless things like just putting the canoe in the water and taking a stream somewhere is something we’ll look forward to.”

She also plans to read (her favorite author is Servite Sr. Joyce Rupp), volunteer with her parish of St. Bernard in Green Bay, travel with her Civil War history buff husband and complete an oral history of her father’s side of the family.

“It’s had a great deal of rewarding times and it’s had its degree of anxiety and sleepless nights,” Johnston said. “You know, being entrusted with the lives of others is an incredible responsibility. I take that pretty seriously, as does everybody who works at Catholic Charities. I am very cognizant that I stand on the shoulders of many great people who have served in this capacity.”

She looked around her office, at the file cabinets to be cleaned out and the desk to be cleared.

“The hardest thing now is saying goodbye,” she said.