According to the group’s website, the mission of Women Celebrate is to “gather women to celebrate our relationship with God encourage and support one another as Catholic women.” 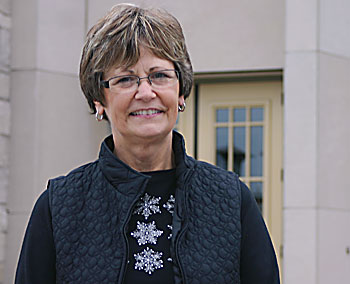 Terri said that the Friday to Sunday event, which has been held each year at the Osthoff Resort in Elkhart Lake, draws several hundred women from around the region. The weekend includes small-group discussions, Mass, a chance for the sacrament of reconciliation, skits, lots of singing and other fun. All of it is centered on a biblical theme.

She and her husband Les have been married for 38 years and have been very active at Our Lady of Lourdes Parish. When their girls were at the parish school, Terri and Les were active in the home school association. They taught religious education and all the family sang in the choir.

Terri said she brought home a renewed spirit after that first retreat and has continued to do so in the years that have followed.

“I came home with a desire to pray and reflect more and I found myself to be a little more accepting of other people. It just gave me a good reference point to keep my life in perspective,” she said.

She was equally touched by a healing service with the laying of hands on several women who were suffering from cancer. “It was very powerful to see that.”

The grandmother of three was so inspired by that first weekend that she invited her three daughters to accompany her the next year and every year since.

“I was also a little apprehensive,” said Kerri Haertl, Terri’s youngest daughter. “I had never been on anything like that before. In the end, it was a great experience which helped me to treasure family and relationships.”

The three daughters are planning to accompany mom once again this year. “It’s always a good time for us to bond,” noted Terri.

Terri said she is very indebted to friends for being introduced to the Women’s Celebrate weekend. It has opened up new faith experiences for her. It introduced her to a side of the church that goes beyond just attending Mass on Sunday. For any woman, young or old, who is thinking about attending this upcoming retreat in 2012, Terri offered advice.

“It’s good to get away from the routines of family and everything else that is overburdening you and spend some time to get in touch with your spiritual self,” she said.