“It’s a 12-hour day from the time you leave home until you get back home,” said Mike Bushman, who coordinates operations at a 22-man food booth on Lambeau Field’s fourth level for Knights of Columbus Council 5514 of Neenah. 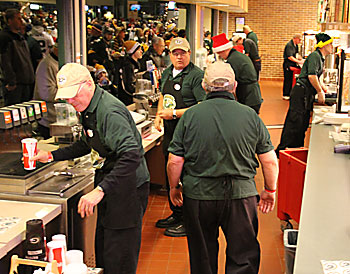 Members of the Knights of Columbus Council 5514 in Neenah, with help from Knights from Oshkosh and Winneconne, spent part of Christmas Day working a concession booth during the Green Bay Packers game at Lambeau Field. Packer playoff games mean extra income for Catholic groups that volunteer at Lambeau Field. (Steve Wideman | For The Compass)

The Neenah Knights of Columbus group is one of dozens of nonprofit groups, both religious and non-religious, that ring all levels of Lambeau Field with food service booths. Other groups, including Catholic schools and parishes, raise funds by parking cars, handing out rental seats, souvenirs and game programs.

Like all businesses around Lambeau Field, the nonprofit groups are happy that the Packers have at least one playoff game (two if the Packers defeat the Giants) at home. The games mean additional income for worthy causes.

According to the Greater Green Bay Convention and Visitors Bureau, a regular Packers home game brings in more than $8 million in revenue for hotels restaurants and other businesses. Playoff games are estimated to be more profitable.

Bushman said the Knights contract with Chicago-based Levy Restaurants Inc., which provides food service to most major league venues across the country, including Lambeau Field.

“Our partners at Lambeau Field are very passionate about giving back to the community,” Eva Yusa, director of communications for Levy Restaurants, said of the Packers’ willingness to allow Levy to bring in community volunteer groups to augment their professional staff.

The Knights’ council is guaranteed $55 per person who works, or 10 percent of the sales, whichever is greater.

Bushman figures the council will earn, not counting tips, at least $600 for any playoff game it works.

Funds raised at the Packer games are used for a variety of purposes, including helping to fund the training of at least two seminarians from the Diocese of Green Bay.

“We decided that was where some of our money would go because that’s where our greatest need is,” Bushman said.

In addition, the council uses the money to help St. Joseph Food Pantry in the Town of Menasha and Father Carr’s Place 2B food program in Oshkosh.

The funds are also used to assist food programs at local homeless shelters.

Funds raised while volunteering at Packer games play an important part in the operating budget of All Saints Parish in Demark.

Volunteers from the parish help man the Packer Pro Shop during home games.

Volunteers currently earn $100 each per game to bag purchases by fans.

“We have eight volunteers for each game so that’s $800 we earn for each game. So it’s awesome that we are having playoff games,” said Louise Reetz, who coordinates the game-day volunteers and a church fund-raising committee called Parish Funding.

Unlike most other groups that volunteer at Lambeau, All Saints works directly for the Packers.

The Parish Funding group contributed as much as $90,000 to the parish, a significant portion coming from Packer games, Reetz said.

“The money goes to our parish to keep our parish alive,” Reetz said. Proceeds from the Packer games have been used to purchase technological equipment for the parish school, including computers, Reetz said.

Reetz said All Saints was helping out at Packer games 20 years ago, before the current Packer Pro Shop was built.

“Back then we handled the money and charge cards. We don’t have to do that anymore. We just pack bags,” she said.

Volunteers are required to be at Lambeau Field three hours before game time and to stay 90 minutes after the game.

“It’s a good chunk out of our day. But the Packers are nice to us. They even give us a very nice meal,” Reetz said.

PMI Entertainment Group in Green Bay also works with the Packers to provide fund-raising activities for church and other nonprofit groups. “We have four parishes under contract,” said Paula Kirchman, vice president of human resources for PMI. She said volunteers take tickets, hand out and pick up rental seats, collect recyclable items and clean up after games.

St. Bernard School in Green Bay has been volunteering at Packer home games for three years, said coordinator Amy Neveau, noting that he school earns $800 per game for their work.

The additional revenue that playoff games offer is a bonus for St. Bernard, she said. “In this economy, it is more difficult for families to come up with fund-raising money … so if we can get closer to our goals as a school, it is a good thing.”