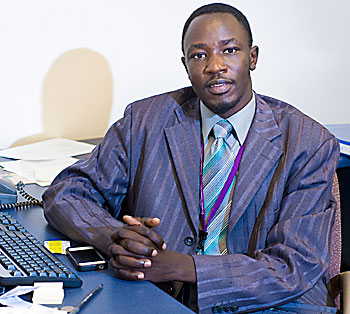 Michael Kuany, who was recently hired by Catholic Charities of the Diocese of Green Bay, escaped death in Sudan when he was about 6. One of thousands of Sudanese known as the ‘lost boys of Sudan,’ today Kuany is helping his homeland through Rebuild Sudan, a nonprofit group he established in 2005. (Sam Lucero | The Compass)

The sound of guns in the distance triggered a warning he remembered hearing from village elders: “Run to the forest. Do not let yourself be captured because you will be cut into pieces,” recalled Kuany, who was recently hired by Catholic Charities of Green Bay as a family strengthening manager, working with immigrants and refugees.

Kuany ran and ran, along with other boys from his village. “I ran until I met up with other groups of boys from other villages,” he said. By the time they reached the Ethiopian border, their numbers grew into the thousands.

It was here, at the Panido refugee camp, that Kuany and more than 20,000 other Sudanese boys could finally rest. Many died making the 1,000-mile trek across dangerous terrain, some of them killed by wild animals, he noted. For the next 14 years, Kuany lived a squalid existence in refugee camps, first in Ethiopia, then in Kenya.

“Many people died of diseases, lack of nutrition,” said Kuany. When Ethiopia faced its own civil war, troops removed the Sudanese boys from the Panido camp. They again had to evade Sudanese soldiers and walk another 1,000 miles before reaching Kenya. The United Nations helped establish a refugee camp for them in Kakuma.

“In the Kakuma camp, life was still hard, but we asked for education to be provided because we valued education,” said Kuany, who spoke the Dinka dialect and learned English while living in the camps. “We had seen it from the United Nations aid workers who came to help us and we thought getting an education was the best means for us to be self-sufficient and be able to give back and help other people.”

When the international spotlight captured the plight of the Sudanese boys at Kakuma in the 1990s, the story of the “lost boys of Sudan” helped reunite many families. For Kuany, it meant emigration into the United States in 2001.

He was sent to Atlanta, but he was told he had to wait two years to enroll in school. He met a family from Monroe, Wis., and was told he could move to Wisconsin and begin school immediately.

After passing his GED test, he enrolled at UW-Madison. He transferred to UW-Oshkosh, taking classes in international studies and political science, in order to serve as an interpreter for a Sudanese family.

Kuany said his goal since arriving in the U.S. has been to help refugees, especially those from his homeland. Over the years he has spoken to groups around the country and was pleased when the U.S. government passed the Sudan Peace Act in 2002. In 2005, the government of Sudan and the Sudan People’s Liberation Movement signed a comprehensive peace agreement. During the 21-year civil war, more than 2 million southern Sudanese died and 4 million were displaced.

That same year, Kuany founded Rebuild Sudan, a nonprofit initiative to help people in his homeland.

Education has no borders

“When the peace deal was signed in 2005, I remembered what I went through and what many other children were going through,” he said. “What I valued the most was education, because education has no borders. You can help anyone anywhere. So I founded Rebuild Sudan to build a school for the orphans. The education they get can be used for the greater good of Sudan.”

The program also builds wells for access to clean drinking water, which Kuany knows can be the difference between life and death in Sudan.

“My youngest sister, who was in a refugee camp with my mother in Uganda … died of diarrhea, which can be treated easily here,” said Kuany. “But because of the lack of clean drinking water, it cost her life.”

Kuany returned to Sudan for the first time in 2007 to see the progress of his foundation and to visit his village. After earning his master’s degree in restorative justice and international development from Eastern Mennonite University in Harrisburg, Va., in 2009, he returned to Sudan. “I was working with the United Nations training government officials on a number of issues such as rule of law. One of the projects I loved the most was called, ‘Access to Justice,’ because, to me, I feel like justice is not there and it was very critical area.”

Last month, an ex-general in the South Sudan army led an attack on Kuany’s village of Juet, killing more than 40 people, including 10 of his relatives. This attack followed a similar massacre last August, when more than 600 people were killed.

On Dec. 21, Bishop David Ricken celebrated a Mass at St. Joseph Chapel, located on the diocesan grounds, and offered special intentions for the victims of the attack.

“That prayer actually helped me,” Kuany told The Compass in an interview Dec. 22. “I appreciate Bishop Ricken coming up with that idea of praying for the victims and supporting them.”

Kuany continues to promote peace in South Sudan from afar. He sees his new job with Catholic Charities as an extension of his commitment to helping people in his homeland. He also knows from experience that Catholic agencies are committed to the cause of easing human suffering.

“I accepted this position because of the trust and reputation that I have learned and seen in the work of Catholic Charities here and also in the work of Catholic Relief Services that is working in Sudan,” said Kuany. “CRS is one of the (non-governmental organizations) that is well respected in the country. I have seen and I believe in what they do.”

Education is key in Sudan

Kuany’s childhood memories of escaping death, mixed with recollections of happy times in his village, make him want to help other people facing hardships. He knows from experience that education is the key to prosperity.

“We are building a school and I call it a school of hope,” he said. “We need to restore hope and confidence that has been lost, to educate the minds and the hearts of those children who have lost their families so that they become good disciples of peace.”

He spent six months in Jalle Payam last year watching the progress of the school’s construction, which should be completed in early 2012.

Kuany, who is Christian, asks that people pray for the success of South Sudan. He also asks people to consider helping him in his efforts to educate Sudanese children.

With the continued support of Americans, he said, “South Sudan is not going to be a failed country. With the (natural) resources they have, it could be used in a better way to help human life. That’s why I’m doing what I’m doing.”

Education, not guns, will transform his people, he said.

“Guns are not a solution to resolve our differences. … I believe in education. We help one child at a time and that child will multiply to many. That is what I’m asking people to take a look and help.”