Music kept her in tune with God

The praise meant everything for Morrissey, now 84, who came to Ss. Peter and Paul in 1949 and joined the choir at age 22. She became its director in 1958 and served in that capacity until 2000. 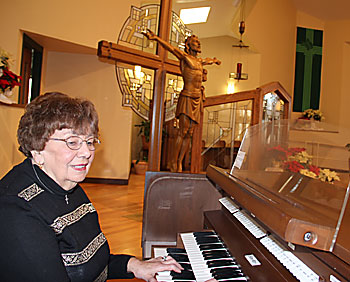 “I loved being a director. It means so much to sing music to honor and praise the Lord. We did not sing for us. We sang for him,” Morrissey said.

Although she stepped down as choir director after 42 years, Morrissey continued to serve Ss. Peter and Paul as organist until last November, when hearing difficulties prevented her from continuing.

“There is a feeling of greatness that comes with playing the organ. It’s a feeling of serenity, of beauty,” Morrissey said. “I stopped playing because of my hearing. I was afraid I would make mistakes.”

Morrissey was born in Oshkosh in 1927. Her family attended St. John Parish, where she sang in the parish choir. One of her two sisters, Virginia Samers, eventually became director of the choir.

The Samers girls received plenty of encouragement from their parents in the way of music participation.

“Right from the time we were 4 or 5 years old our mother would sit us down and teach us the piano,” she said.

They loved singing so much that Pauline, Virginia and their other sister, Genevieve, formed a trio that not only sang in church, but lent their voices to a variety of community events in Oshkosh.

Morrissey moved to Hortonville in 1949 with her husband, Bill, who had taken a job at Hortonville High School. They joined Ss. Peter and Paul and Pauline immediately became involved in music ministry.

In 1958, she was appointed choir director by a trained musician hired by the parish, Dr. Horton Roe, who taught her to direct and the choir to sing.

“My big thing was directing. I loved getting the four sections of our choir to sing at the same time and hear them sing with the emotion of the word,” Morrissey said.

Morrissey threw her love of God into her job and tapped into the religious passions of choir members.

“I would say to them ‘What does this song mean to you? How can you convey that meaning to the public?’ Heaven knows. When you sing Alleluia everyone knows how to do that,” she said.

In 1962, Roe took the choir on a trip to Milwaukee, where they sang for Mass at Gesu Church on the Marquette University campus.

“Gesu Church is a very big church. It was a special experience for us,” Morrissey said.

She borrowed from Roe’s traveling choir concept and took the Hortonville group on the road to local concerts, including the Outagamie County Fair, to perform during the state’s sesquicentennial celebration.

“I don’t like the label performance,” Morrissey said. “We weren’t putting on a show. We were singing for the glory and praise of God.”

At the same time she served as choir director, Morrissey managed to find time to take private piano lessons and signed up for organ lessons at Lawrence University. When guitar Masses become popular Morrissey learned to play the guitar.

Morrissey was one of the first to complete a music ministry program offered by the Diocese of Green Bay.

She also taught music and trained the choirs at Ss. Peter and Paul School.

Although Morrissey officially retired from directing in 2000, she returned two more times.

“I actually retired three times. Two other directors came and quit, so the church called me to come back” Morrissey said.

In 2004, the current choir director, Larry Manley, came on board to finally relieve Morrissey of her director duties.

“Certainly Pauline is very gifted and giving,” said Greg Layton, parish director. “She is a wonderful example of stewardship, of giving of her time and talent. She is not afraid to give her all.”

For the past 16 years Morrissey has played the organ weekly for people living at St. Joseph Residence, an assisted living facility in New London.

Morrissey has two favorite songs, “How Great Thou Art” and “Center of My Soul.” The latter, by Ralph Merrifield, goes right to her heart from the very beginning:

Lord, You’re the center of my soul

Both my beginning and my goal

All that I am and all that I’ll be

Draws from the life You give me…

“My entire life has been guided by the Lord,” Morrissey said.