A conversation and then a period of discernment led Sr. Laura and Fr. John to develop this unique collaborative vocations ministry that is having an impact throughout the entire diocese. 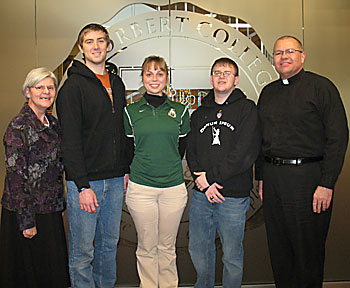 Sr. Laura left her position at the end of last school year as campus minister at Notre Dame Academy in Green Bay to become director of vocation ministry for her community. In August 2009, Fr. Tourangeau returned to De Pere from New Mexico after over two decades of service there with the Norbertines. Why not team up, they decided, to spread what they call the “culture of vocation” within the diocese.

“What we want to do is invite Catholic young people to a call to holiness,” said Sr. Laura. Their ministry is focusing on the young adult population, ages 18 to 35, but their schedules are also busy with visits to area parishes to meet with students in parish religious education programs.

St. Norbert College serves as home base for their collaborative ministry. Both hold regular hours there and they are active on campus. For example, they participate in the prayer time the campus has each Wednesday at 10 a.m. And on the third Thursday of each month they conduct a holy hour at 7 p.m., when prayers are offered for vocations.

It was on campus where they met two students who are currently discerning if priesthood is the right path for them. Matt Mahon, 20, a sophomore from Cary, Ill., and Bryan Lauer, 19, a sophomore from Park Forest, Ill., were among eight young men who recently attended a discernment weekend at St. Norbert Abbey in De Pere.

Mahon was looking forward to the weekend to explore life as a Norbertine and “get a feel for what I will be doing.”

Fr. John said he met Lauer one day when he was having office hours in the vocations office. “‘I think I need to discern a calling to the religious life,'” Fr. Tourangeau recalled Lauer saying. The two had never met before, and so began a long conversation.

Lauer chatted in the vocations office the evening before he would attend the St. Norbert Abbey discernment weekend. He recalled how two years ago he was asked by a Carmelite priest to consider religious life. The idea never left him. “I figured this opportunity came along,” he said of the St. Norbert Abbey weekend. It would give him “some time to think about it,” he said.

Discernment is a journey, said Fr. John. And the first step, both he and Sr. Laura agreed, is that initial invitation. “What will give my life meaning and purpose?” she asked.

Their vocations office offers a “ministry of presence,” said Sr. Laura. It is also here, said Fr. Tourangeau, “to help build a culture of vocation at all levels of life.” The conversations they have with students run the gamut, from how does one pray to relationship questions. “We’re here to listen,” said Sr. Laura.

Today’s vocations effort is quite a bit different than a decade ago. Both Sr. Laura and Fr. Tourangeau are fully aware that social media is the best way to connect young people to the culture of vocation. Sr. Laura just started blogging, and there are postings on Facebook and YouTube. They also invite anyone interested in beginning their own personal discernment process to see the websites www.catholics oncall.org or www.charisministries.org. They also added that local Serra clubs have been supportive of their collaborative vocations ministry.

And just like the Norbertines, the Bay Settlement Franciscans also have discernment opportunities. Their “Opening Doors” weekend is held two times a year, during December and also Holy Week. And, on the second Thursday of each month, women “are invited to come for prayer with the sisters and to talk about what religious life is like,” said Sr. Laura. That opportunity is called “Beginning Conversations.”

“Invitation is huge,” said Sr. Laura. She recalled how her sixth grade teacher, a sister, asked her to think about religious life. Nothing came of it until after high school, she said, but her parents saw something in her and “nurtured that vocation.”

Sr. Laura noted with a smile that her entire educational career — from primary education through her master’s degree — has happened within a five-mile radius of St. Norbert College. She was working in a grocery store when she made her initial visit to the Bay Settlement community. “It just felt right,” she recalled.

For Fr. Tourangeau, a native of Escanaba, Mich., it was during eighth grade when an invitation to religious life was made by a Capuchin priest at his parish. In 1974 he went to a pre-novitiate program offered by the Capuchins.

But it was his own uncle, Norbertine Br. Clement Tourangeau, who asked him to consider life as a Norbertine.

Once an invitation is considered, then discernment is so important. “Discernment is like time out in a sense,” said Sr. Laura. It’s just time “to discern God’s work in your life,” said Fr. Tourangeau.

A lot of young people don’t feel supported as they explore religious life, he noted. What people forget is that the process of entering religious life is actually for most a much more thought-out decision than even entering into marriage. Usually it’s four to six years of temporary commitment and then if the person decides against final vows, he or she is free to leave.

Sr. Laura keeps regular work hours Wednesdays during the day and Sunday evenings. Fr. John can be found in the vocations office on Monday, Tuesday and Thursday.

Their presence on campus is special. “There’s not a lot of sisters on campus right now,” said Fr. Tourangeau, adding that there are “really only a handful of Norbertines.”