During a visit to Clarke’s home, Msgr. Schuh described how the new Roman Missal is heavier than the previous one. “He thought some of the older priests might have trouble lifting it,” said Clarke. 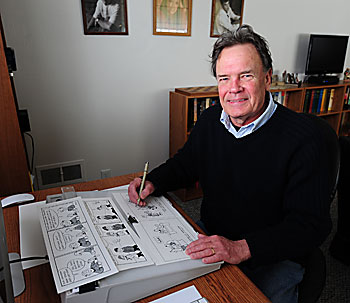 Kevin Clarke sits at his home office in Kewaunee, where he draws comic strips for the Brillion News and the Denmark News. He recently expanded his cartoon subjects to include religious themes. (Sam Lucero | The Compass)

Msgr. Schuh suggested that Clarke draw a cartoon of a priest lugging a missal into church with a carrying case on wheels and sending it to The Compass. That submission led to another opportunity for Clarke: to create a Lenten cartoon. (See page 22.)

Recapturing a childhood zeal for drawing cartoons — at an age when his counterparts are collecting retirement pensions — has rejuvenated Clarke.

“I am semi-retired and can now devote more time to my life-long dream of being a cartoonist,” he said.

Clarke, the son of a policeman, said his father’s work took the family to different parts of the country, which meant transferring to new schools. “I went to six schools in eight years,” Clarke said. Being a new student meant trying to be accepted, he said, and his cartoons were his ticket to acceptance.

“The best way to have kids like you is to be funny and I think through my drawings they came to accept me more,” he said.

He attended Catholic boys’ schools, run by the Sisters of Mercy, the Marists and Christian Brothers, and graduated from Marist Brothers High School in Subiaco, Australia. Many of his teachers were cartoon subjects. “My classmates loved them but I had a few close calls with some of the brothers finding out,” he said. 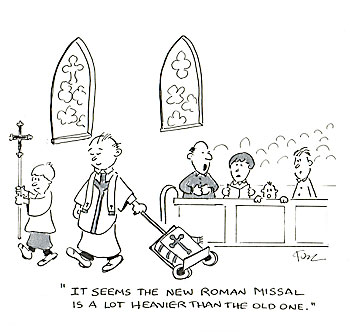 Clarke said his father wasn’t keen on the idea of his son pursing an art career. “He didn’t want me to end up being like some of the people he arrested,” he quipped.

Instead, he began a career in banking after high school. In 1974, he met his future wife, Rosemary Huettl from Seymour. She was part of a group of U.S. teachers who had taken teaching jobs in Australia. The two began dating and were married on Feb. 6, 1976. They moved to Green Bay, where Clarke was hired at Kellogg Bank, now Associated Bank.

“I worked for them for about 13 years, then we bought Rudy’s Diner in Brillion in 1989,” he said. They spent 22 years in Brillion before selling the diner and moving to Kewaunee last June. It was in Brillion, while a member of Holy Family Parish, that Clarke met Msgr. Schuh.

When he left the banking profession, Clarke thought he would have more time to devote to his drawing. “But working 12- to 15-hour days in the diner, I didn’t produce anything,” he said.

In 2004, Clarke had knee replacement surgery. The recovery not only gave him time to sketch, it gave him inspiration for his cartoons.

“Seeing I was getting around on a walker and a cane, I thought, ‘That’s a good name for a couple of old guys, Bud Walker and Gus Cane.’ So that’s how my comic strip started.”

Clarke said syndicating a comic strip is difficult, made even more so for someone his age. It’s at these times, he said, that he’s turned to his faith for strength.

“Even as little as a few months ago, I asked, ‘Is this what God wants me to do?'” he said. “I know he planted a seed in me years ago and it’s still in me. He must have wanted me to do something with” his artistic skills.

Clarke said he often reflects on Matthew’s Gospel passage, where Jesus walked on water and Peter came out to meet him. But when Peter became frightened, he began to sink.

“When I’m feeling lost or unsure, I say to myself, ‘I’ve got to keep my eyes on Jesus.’ It’s amazing how that works,” he said. At times he doubts his artistic skills. “I wish I could draw better and have better jokes, but all I’m doing is my best,” he said.