Back to church after 20-year absence

“And I just went with it. I said to myself, ‘Yeah, how can that be? They must not exist. That’s nonsense. I’ve got my health and I’m smart, so I don’t need that spiritual sustenance.'” 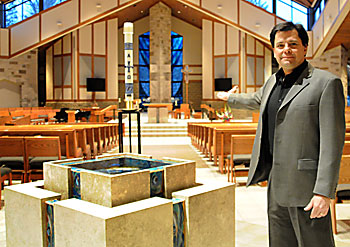 For the next 20 years, Bacalzo didn’t attend church, something he did regularly with his family while growing up in the Milwaukee area.

“I found myself with a lot of things — a great job, a lot of toys, wonderful family, good health,” he said. “But much later on, as the years went by, something felt empty in me.”

“It was a one-two punch,” Bacalzo said. “I began to question a little more about the meaning of life. Inside, I felt empty — very, very empty. I kind of felt left to wonder, ‘Is this it? There must be more.'”

In his search for more, he said he walked past St. Peter the Fisherman Church “and it just kind of came to me. This was less than nine months after my mother’s death. I said, ‘I should really go and attend a Mass.’ My mother had always wanted me to get back in the church.”

So for the first time in 20 years, Bacalzo returned to the Catholic Church.

“I woke up Sept. 11, 2005, a Sunday morning, and it was a sunny, summer-like day,” Bacalzo said. “My family was asleep and I decided to go take in the 10 o’clock Mass. I remember seeing the Mass times on a sign in front of the church and decided I was just going to go do this.”

He said the homily was on accepting invitations. “I swear Fr. Bill O’Brien was looking right at me when he said, ‘Thank you for accepting the invitation.’ I felt completely at home. My neighbor, who happened to be Catholic, spotted me in the parking lot and invited me in. ‘Sit with me,’ she said. So I felt very welcome here from the moment I walked in the door.”

“After a while she invited me to be a substitute catechist for high school students,” he said. “I thought, ‘Why me?’ But how can I say no to this beautiful person? It pulled me in more and more, and I continued to explore. Teaching the sacraments to high school kids, you’ve really got to know your material. And they deserve it, they deserve for a teacher to know the material, so I explored it further with Sr. Jackie and with (the parish). To the point where they asked me to be a full-time catechist, a master catechist, for the 11th grade.”

In addition to teaching 11th grade catechism, serving at Mass and helping as an assistant youth basketball coach, Bacalzo is on several St. Peter the Fisherman Catholic School committees, the board of trustees at Roncalli High School and facilitates St. Monica Sodality, a prayer and support group at St. Peter the Fisherman that’s open to anyone with family members who have left the church. The group, which started last September, meets at 5 p.m. the third Wednesday of each month.

Now that he’s back, Bacalzo is helping bring others to the church, as well.

“I introduced my son (Brandon, now a Roncalli freshman) to catechism and he embraced it,” Bacalzo said. “We’d talk about Mass on the way to Mass and on the way home from Mass, and what it meant. Not only did it awaken something in me, but it awakened a faith in him that I pray will carry him through his dark times in life.”

When asked what advice he’d give others who are considering returning to the Catholic Church, Bacalzo said: “Explore it. When you feel a hunger pang and you know it’s not physical, what are you doing about it? It’s something calling you. Just as your stomach calls you, your mind calls you to explore things through curiosity. Don’t ignore it. You need it. Just as your body will suffer without food, your spirit will suffer without nourishment.”

As for his 20-year absence from church, Bacalzo said he wishes he had that time back.

“But it wasn’t meant to be,” he added. “It’s part of God’s perfect plan. No matter the choices we make — and I made a poor choice by rejecting my faith for those decades — God is making something beautiful and right out of it. Hopefully, I can lead by that type of example — by showing that even if you leave, you can come back. I’m here again, and I wouldn’t want to be anywhere else. I’m a servant of God, and I’ve come to glorify him.”