Nimubona, who has been working as an instructor of mechanical engineering at Fox Valley Technical College since 2002, left his country in 1994 and fled to Canada during the country’s long-standing civil war. He explained that while neighboring country Rwanda received much of the attention during that time, the ethnic genocide that was occurring in Burundi was just as bad and it has never really recovered. That is why education is such a passion, Nimubona said. 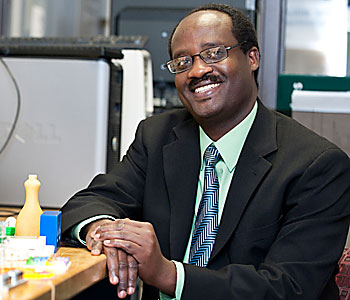 Egide Nimubona, a native of Burundi who now lives in Appleton, said the education fund he began with the help of the Catholic Foundation in 2010 will allow more than 240 children to attend school next year. (Kasi Koshollek | For The Compass)

“To go to school is the only way out of a cycle of poverty. So by educating these kids, we can give hope to the whole country,” noted the father of two teenagers. “Kids will have hope and projects to keep them busy.”

Cindi Brawner, executive director of the Catholic Foundation for the Diocese of Green Bay, which manages the Burundi Fund, has been impressed with Nimubona’s drive and vision.

“His passion for education was the first thing that struck me,” Brawner said. “Then I realized how much respect Egide had for his father, whose strong commitment to educating his children — not only his sons but even his daughters, which was so rare.”

Joseph Nishirimbere was Nimubona’s father. He was murdered in 1990 by his neighbors, who Nimubona said were jealous of his plan and sacrifice for his family.

“My father had a fourth-grade education and was a subsistent farmer like the majority of Burundians,” he said. “He knew that education was the key to a better life. All seven of us (siblings) did go to school despite the fact that he needed us to work in the field. The neighbors became jealous of my father’s success; he became ‘rich’ because we were sending money home and they killed him.”

The charity that has been established in Burundi to manage the Education Funds locally is named after his father. Last summer, Nimubona was on hand for a charity event in Burundi in which he was able to check up on some of the endowment’s current projects. These works included school supplies, hygiene items and the construction of a new dorm for girls. He was able to see firsthand how grateful the young people were in receiving their scholarship money.

“It was not so much the money, per se, but the thought that someone somewhere is in my corner,” he said. “The kids are receiving a seed of love to plant themselves where they can.”

The goal this year is $100,000 for the Education Fund. As for the road ahead, Nimubona hopes to raise $1 million within five years because he wants this work to continue far into the future.

Brawner can’t say enough about this worthy cause.

“I think it’s important for all of us who have so much to remember that not everyone is as fortunate as we are,” she said. “Helping people in Africa or other third-world countries helps us keep that in focus. It helps us realize that the world is much bigger than what we see each day.”

For more information about the Burundi Education Fund, visit www.educateburundi.org.