Wins (three at press time) have been tough this season for the SMC boys, but Janssen isn’t discouraged. He embraces playing the top teams in the Olympian Conference.

“It’s fun. I like playing those big teams because it shows how your match up,” he said. “You have to compete night in and night out; otherwise, you are going to get it handed to you. It’s better than playing in a conference where you win by 50 points. I would rather have that challenge.

“When you look at those other teams, they have those kids that are 6’5″ or 6’6,” he added. “We don’t have much of that. That just means that you have to work harder.”

SMC is among the smaller schools in the Olympian in terms of enrollment. The majority of the teams, including Brillion and Wrightstown, ranked seventh and eighth in the state, respectively, are Division 3 schools. The Zephyrs will compete in Division 4 during regionals. 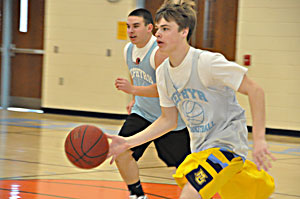 St. Mary Central High School point guard Nick Janssen pushes the ball up the court in practice. Janssen leads the Zephyrs in scoring. Teammate Terry Miner is pictured in the background. (Dick Meyer | For The Compass)

“We feel that we can beat a couple of the teams we have here down the stretch,” said Janssen. “When we play the big teams, try to compete with them and try to hold them to a reasonable amount of points, so maybe we can give ourselves a chance to win in the fourth quarter. Our goal is to compete as hard as we can so when we get to tournament time, we can do some damage.”

Janssen leads SMC in scoring at nearly 14 points per game. He worked hard in the offseason, taking 20,000 shots over the summer.

Like many SMC athletes, Janssen competes in three sports. He started at quarterback for the Zephyrs in football, throwing 15 touchdowns and passing for more than 1,000 yards. SMC posted three gridiron victories, most since the 2002 season.

“Football was fun this year,” said Janssen. “We started out strongly at 3-1. A couple of tough losses and injuries hurt us down the stretch, but it was fun winning those games. The school community got behind us. It was amazing how they supported us. It feels really good to start that and hopefully they can keep it up.”

Not having an offseason has provided lessons in time management, said Janssen. In the spring, he will return to the diamond for the Zephyrs. Baseball is his top sport. He earned all-conference honors last season and was also named an American Legion all-star while playing for the Menasha Twins during the summer. He will play baseball collegiately at Indian Hills Community College in Centerville, Iowa.

Janssen started at second base on the varsity as a freshman at SMC before moving to shortstop, his current position, as a sophomore. The team has enjoyed success during his high school career winning at least 15 games each season. Last year, the squad advanced to sectionals. Janssen has high expectations for this season.

“We graduated the top two pitchers, but we have a couple of young guys that are looking pretty good,” he said. “We should be able to compete for the top of the conference and when we get into the playoffs, we should be able to go pretty far.”

Janssen grew up around baseball. His father, Phil Janssen, is the head baseball coach at SMC and a former professional baseball umpire, who now works for the Major League Baseball Umpires Association.

“I have to earn everything I get,” said Janssen in reference to playing for his father. “It’s good. I can tell him things about the game. We can talk about what we saw from our separate sides.”

Baseball is a statistical-based sport, but Janssen isn’t concerned about posting numbers.

“I just care about the wins and losses,” he said. “I do whatever I can to help us get the win. If I have to bunt, hit and run, I don’t care if my (batting) average goes down as long as we get the win at the end of the day.

“I try to help the younger kids,” he added. “We will have a couple younger guys playing in the infield.”

Assisting the underclassmen is a way of paying it forward for Janssen. He recalls the examples set by former SMC athletes, including Rob Frozena, who played for the Marquette University basketball team as a walk-on from 2007 to 2011.

“Rob is a nice guy and a great team player,” said Janssen. “Because my dad coaches, I was always around the team. I always liked talking to those guys. Brian O’Connell played shortstop when I was freshman. I learned a lot from him. Anthony Lutz (catcher) is another guy I looked up to on that team.”

Janssen admits that he has thought about coaching following his playing days. For now, he’s focused on a strong finish to his prep career.

“It’s an honor to play here considering all the great guys who came before me,” he said. “You want to keep the tradition going.”