No time to spare for bowling manager turned lay minister

That voice of God in Kacala’s dream two years ago not only spared him from imagined death, but, upon awakening, encouraged the former bowling alley manager. He decided he should continue life’s journey as a lay minister teaching youth about their Catholic faith. 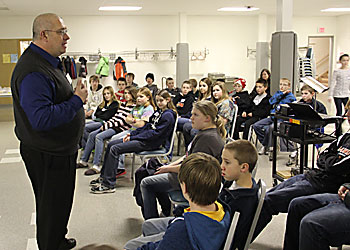 Kacala, 51, praised the Emmaus program of the Diocese of Green Bay — formerly known as Commissioned Ministry Leadership Formation Program — for re-awakening interest in his faith, a faith largely ignored during his 30-plus year career in the bowling industry.

“If it wasn’t for the Emmaus program I wouldn’t have the tools, technically, to do what I do,” Kacala said of changing careers to become coordinator of youth ministry formation programs at St. Katharine Drexel Parish in Kaukauna.

“And I wouldn’t have developed the spirituality to allow me to journey further in my faith if not for Emmaus,” Kacala said.

The Emmaus program is one of many programs and ministries of the diocese funded through the annual Bishop’s Appeal, which raised $5 million in 2011, including an allocation of $724,362 for ministry formation.

Tony Pichler, director of the Emmaus program, said the Bishop’s Appeal is critical to developing lay ministers like Kacala.

“We couldn’t do what we do in forming people for ministry in the parishes without assistance from the Bishop’s Appeal,” Pichler said.

Kacala is a Milwaukee native, one of four brothers in a devoutly Catholic home. 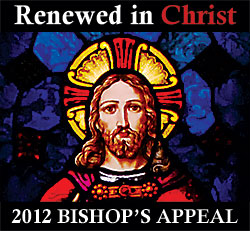 “We were a Polish-German family with crucifixes and holy water fonts on the walls,” Kacala said, adding that his faith formation as a youth fell by the wayside.

“I was a very disengaged Catholic. Faith didn’t play a part in my life at all,” Kacala said.

At 16, Kacala got involved in fixing and maintaining bowling machines. “I loved figuring out a problem and the process to fix them,” Kacala said.

In 2002, with a wife and children of his own, Kacala took a job as facilities manager at Super Bowl in Appleton.

Kacala’s life changed, although he didn’t immediately know it, when he attended an informational meeting at Holy Angels (now Holy Spirit) School in Darboy concerning faith formation classes for his children.

“As a parent I felt I had to go. Plus my wife couldn’t go that night,” Kacala said. “As I was sitting in the crowd, for the most part disengaged, the leader, Sr. Elise, said she was looking for teachers.

Kacala volunteered to help. “I have no idea why I got up and said that. When I got home I said to myself ‘What the heck did I do?'” Kacala said.

“I had no idea what social justice was,” Kacala said. “My wife found it pretty unbelievable I would do something like that. It was uncharacteristic. It was a 180-dregree turn from the person I was.”

“To this day I cannot point out why I did it, but when I said I would help out I was committed to teach. I’m pretty strong willed. My mom and dad raised us to be people of our word,” Kacala said.

His commitment turned to a hunger to understand his faith.

“When Jeff came through my door, he was looking at how to take this opportunity to volunteer and make more of it,” said Pichler. “It was almost like night and day watching Jeff grow. He was limited in what he knew about the church, the Catholic faith and Scripture. But through the program he grew so much in his understanding in the teachings of the church and in his personal faith. He also developed so many skills in the ministry, in doing faith formation and youth ministry in the parish.”

In 2005, after three years of attending classes, working full-time at the bowling alley, teaching faith formation and trying to pay attention to his own family, Kacala considered changing careers and working in religious education.

“I’ve always been a person who sought something mystical or exciting in my life,” Kacala said. “After I finished working with the kids in religious formation I always had the feeling I had been part of something big. There was just a rush. And there was a hunger to keep that rush.”

As his children were growing older and money was less of an issue for the Kacala household, he and his wife decided the time was right for Kacala to work in religious education on a full-time basis.

“I worked in the bowling industry for 30 years, but there was never the passion like I had for teaching,” Kacala said.

After several failed job interviews, Kacala responded to an ad in The Compass for a part-time position to work with the youth and young adult ministry program at St. Mary of the Annunciation (now St. Katharine Drexel) in Kaukauna.

“I felt overwhelmed. I had the opportunity for the first time in my life to understand that I would do what I was supposed to do from the beginning of my life: to teach and share my faith experience with others. The passion was always there. I just didn’t know it,” Kacala said.

“It was a tough transition to move from being dirty and greasy all the time to working behind a desk,” Kacala said.

Kacala said he enjoys working with youth in faith formation and seeing them come to understand their Catholic faith.

“Sometimes you see that stare in a kid’s eye. You can almost see the smoke rising because they’ve been working the gears in their brains and hearts so hard. You just know they’ve got it. Whatever it is, they understand something right then. That’s awesome. I just love it,” Kacala said.

Kacala is currently pursuing a bachelor’s degree in theology through Silver Lake College in Manitowoc, a partner in the Emmaus program.

Pichler said Kacala “epitomizes the journey that the Emmaus program is all about.”

“He’s gone so far on the journey yet he knows the journey is not over,” said Pichler. “Is it over for any of us?”