“It’s when a person makes drum beats with their mouth. My favorite part of beat boxing is when you actually beat box and sing at the same time,” Fr. Aytona explained, as he pressed a microphone to his mouth. “If you ever wondered what priests do in their free time, they would do something like this.” 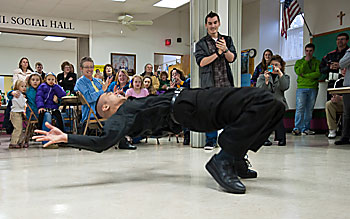 Father of Mercy Jewel Aytona demonstrates his break dancing moves, left, during a pizza social with youth and families at Holy Name of Mary Church in Maplewood Jan. 15. Above, Fr. Aytona gives a beat boxing performance. Fr. Aytona, 28, began break dancing when he was in fifth grade. (Sam Lucero | The Compass)

Fr. Aytona, 28, grew up in the hip-hop culture of southern California. He started break dancing when he was in fifth grade and within a year was dancing in competition. “My older brothers were part of a break dancing crew. I would hang out with them and their friends and I would just join along. It kept us out of trouble,” he told The Compass.

He and his brothers, John and Joseph, were part of a break dancing crew known as “Sent from Above” and they competed against other groups at youth dance clubs. Fr. Aytona’s break dancing days ended when he began playing high school basketball at Rancho Cucamonga High School, from where he graduated in 2001. But he resumed the pastime when he started teaching religious education at St. Peter and St. Paul Parish in Alta Loma.

Many of the students preparing for confirmation were break dancing enthusiasts and were happy to learn their young teacher was once a competitive break dancer, he said.

“From that point on I really discovered (break dancing) could be a possible means to connect with the youth,” Fr. Aytona told The Compass, adding that this still holds true today.

“I think it is valuable to show that priests are not just these foreign people. They have hobbies and talents just like anybody else and we want to utilize those for the greater glory and honor of God,” he explained.

Fr. Aytona said his involvement in parish youth ministry guided him to ordained ministry. His older brother, Joseph, entered the Fathers of Mercy religious congregation in 2003, and one year later Fr. Aytona joined the order. He was ordained to the priesthood last summer and his first assignment was at the shrine. He said he learned how to beat box while in the seminary.

“It was through a friend in a different religious order. When I came to visit him, he was beat boxing and rapping. When I saw that I said to myself, ‘I have to learn to do that,'” said Fr. Aytona.

He began practicing the craft in his free time and writing his own music. The priest said he saw this skill as another way to reach young people. He said rap music has a negative reputation because some performers, called rappers, use obscene lyrics.

His intent is to show that the rap genre can be used in a positive way. “My message is not to lower our standards to meet the kids where they are, but to raise them higher, to (connect them) with the Lord and his truth.”

Fr. Aytona has written two songs and is working on a third. “My ministry doesn’t permit me to have time to be writing and producing music,” he said. “When more time opens up in the future, my plan is to write more music.”

The main apostolate of the Fathers of Mercy is to preach parish missions and retreats. This background is why Bishop David Ricken invited the congregation to staff the diocesan shrine in Champion. Fr. Aytona said he and fellow Father of Mercy Peter Stryker want to continue the mission that the Blessed Mother gave to Adele Brise in 1859: teach children how to pray and what they need for salvation.

Fr. Aytona hopes to get the high school youth group off the ground in February, with meetings possibly on Sunday or Monday evenings. He plans to include break dancing and beat boxing demonstrations.

Parish youth groups interested in learning about the shrine youth group or having Fr. Aytona present demonstrations of beat boxing and break dancing at their school or church can contact him via email: [email protected]