“It was during my summer and I wanted to spend it with my friends,” she said. “That’s not always the cool thing to do, to go on mission trips, but I loved it so much. I was hesitant at first too because I’m usually not one to talk about my faith at all. I told my mom on the way there that if they ask me to talk about (my faith), I’m not going to. I’m just going to sit there or walk away to get a drink or something. I didn’t want to talk about it.” 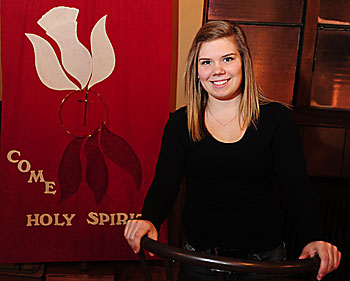 Engebos, the daughter of Steve and Jody Engebos, spent the week painting and doing other tasks for people in need. She also made new friends and grew in her faith. The experience opened her mind and heart to more spiritual opportunities.

Last summer, Engebos traveled to Chicago for Alive in You, a youth event described as “part conference, part service camp and 100 percent Catholic.” She sold candy bars to raise funds for the trip. In Chicago, her team worked at a nature center cutting down trees and laying mulch. Engebos said that the group worked hard, but received more from the experience than they gave.

One speaker in particular at Alive in You delivered a message that had a profound effect on Engebos. A man spoke openly about how his wife had cheated on him and his struggle to find forgiveness. Engebos thought about a friend who she had not spoken to in a year. Overcome with emotion, she left the room.

“When I left, another person, from Texas, who I had never talked to before, followed me out,” she explained. “He saw that I left and he ran after me because he saw that I was starting to cry. He asked if I was OK. I didn’t have my cell phone on me. He let me borrow his, so I could call my friend and say that I forgive him.”

Engebos, who lives in Suamico, caught up with the speaker at dinner.

“It was so powerful,” she said with tears while recalling the experience. “I just went up to him and gave him a hug. I said, ‘You really helped me.’ He said, ‘It doesn’t matter if I help the whole world, just knowing that I helped one person, I feel so much better.’ He felt so awesome.”

Engebos is taking another step on her faith journey through preparation for confirmation. She invited her grandfather, Larry Engebos of Crivitz, to serve as her sponsor. The experience has brought them closer.

“Before this, we got along and were just grandfather and granddaughter,” she said. “We would go snowmobiling together, but this has just made our relationship so much stronger and deeper. It’s more special now.”

Summer plans are still in the works for Engebos, who has also been involved in Catholic Youth Expeditions, St. John Bosco Youth Day at Holy Hill and helping out with middle school events offered by the westside Green Bay parishes. She is considering a mission trip in Michigan or returning to Alive in You, which will be based at Xavier High School in Appleton, July 10-15. She encourages other young people to take advantage of faith opportunities.

“Try going on mission trips; try getting involved at different places,” she said. “I’m not a very ‘churchy’ person; I’m just kind of an everyday person and I loved these things.”

Engebos is now open to talking about her faith, not only in front of the parish community, but especially on mission trips.

“I felt so comfortable with the people there that I just did it,” she said. “The people there are different than the people you meet every day. Immediately, I felt that I could trust them with anything. If I meet people at school, it takes longer to develop trust. I met people from all over the country who are so awesome.”