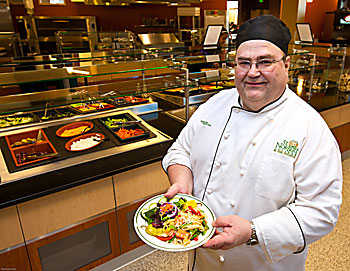 While the new amenities provide for a more diverse menu, changes are made for Lent, added Froelich, who has been at the college for 23 years.

“For breakfast, we have omelets made to order,” he said. “We always have vegetable pizzas for lunch and dinner. I spent a lot of hours testing pizza dough. If we have burgers at The Grill we will offer a veggie burger. We always have hummus at the deli bar and the salad bar has a wide variety of choices.”

“We do revamp the menu and minimize the meat dishes,” he said. “We probably cut 80 percent of the meat. We will put out an extra egg dish for breakfast. We try to be versatile. As an alternative to the traditional fish sandwich, we will make a shrimp po’ boy. A French toast bar with a variety of toppings is popular and we can offer it at lunch. (Students) eat French toast anytime.”

Froelich is happy with the changes created by the renovations. The food is fresher, he said. Cooking in front of people also has its advantages.

“The staff likes the exchanges with the students,” said Froelich. “Who doesn’t like being asked how your day is going? In the past, if we wanted to talk with people, we had to go to their tables. People don’t like to be interrupted while they are eating. We can now talk to them at the stations and get their feedback. The college is all about communio and this helps build community.”

Ruth’s Marketplace, the new dining hall, is named for Ruth Michels. The Michels family, owners of the Michels Corporation, an engineering and construction firm, donated seven million dollars to the college, which was used to transform the Sensenbrenner Memorial Union. The renovated facility opened at the end of January, a semester ahead of schedule. Michels Commons also includes Dale’s Sport Lounge, named for the late Dale Michels. Adjacent to Ruth’s, the lounge provides expanded seating during meal times. The space is equipped with televisions, and basket menu selections are served in the lounge after dining hours. The renovations increased dining hall seating at St. Norbert from 450 to 600.

Froelich said that feedback about the new dining experience has been positive from students, faculty and staff. The number of meals served has increased considerably from a year ago, he added. Ruth’s Marketplace is open to the public. Visitors pay at the entrance. Featured menu items are available online at www.snc.edu/dining/union/menu.html and on Twitter.