Many of his prayer requests come from a charity he established a few years back. It is called Abigail’s Helping Hands and is named after his beloved dog Abigail. Neal explains that the mission of this charity is to comfort those who are experiencing loss and grief due to the death of a pet. 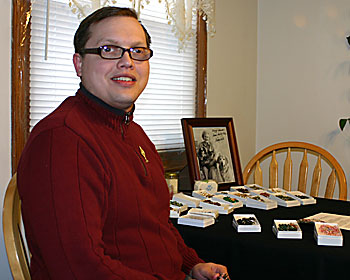 “It was inspired by my sister, Heidi, who lost her Pomeranian-poodle, Sheba, several years ago. She had Sheba since she was in grade school,” explained Neal. “While there are a number of groups that help provide aid to owners with sick pets, there wasn’t anything out there to comfort those who had lost an animal companion.”

Neal said that the charity provides a place for him to help owners in their personal struggle to walk through the pain of losing a pet. So far, his ministry has helped three families with loss and then subsequently pet adoption.

In talking with people from around the nation via his website, he has been able to pray for a vast myriad of personal requests. “I have prayed for everything from dead dogs to people looking for a new job,” Neal told The Compass.

His favorite prayer is the rosary. “I pray the rosary twice a day,” he shared.

He said his grandmother introduced him to this Marian prayer. After her husband died, Neal made a point to visit her weekly at a local nursing home and they attended Mass at St. Willebrord Church on the weekends. “She asked me if I had a rosary. I didn’t and so she gave me one,” Neal noted.

He said his grandmother, who has since passed away, also suggested that he take up rosary making as a hobby to keep busy. Since 2009, he estimates that he has made around 500 rosaries.

He gets his supplies from a company in New York. His favorite type of rosary to put together is a wooden one. These days it takes Neal one afternoon to put the prayer beads together. Not only does he make rosaries but he has been called upon to give talks on its rich history and value in praying it. Last month, he gave a presentation at a parish in Neenah.

Neal’s biggest supporter in all of his good works is his mother, Randi. “Even though he cannot go out and work in the world, what he does at home through his praying and his meditation on the rosary he has helped so many people. He has put his heart and soul into this and it is good therapy for him.”

Randi explained that once the word got out about his rosary-making ministry, requests were coming in from all over. The money raised from rosary sales, as well as his newest products of soap and candles, go to fund Abigail’s Helping Hand.

“Neal has such a big heart for helping people,” she said. “Through his beloved Abigail he knows how much it means to have an animal as a companion.”