He also was told that chemotherapy and radiation would do him no good. After discussing the situation with his wife, Rose, he said, “I thought that would be better than no arm at all.” 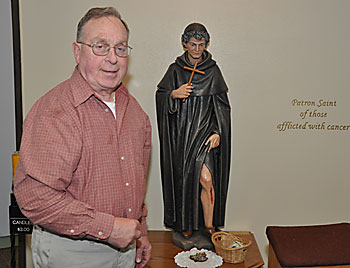 “I spoke with Fr. Andy (Andrew Kysely, pastor of St. Paul Parish in Combined Locks) and he suggested giving me the (sacrament of anointing of the sick), which he did one day after Mass.”

In addition, his wife’s brother (Msgr. Jim Vanden Hogen) also gave him anointing of the sick. “I attribute that to my health being improved,” he said. “The prayers of everyone around me is what is pulling me through.”

The cancer now seems to be in remission and he wears his arm in a sling. Jerry and Rose were planning a winter getaway to Florida. He continues to usher at his church and wants to get back to other volunteer work. Before the surgery, he was a volunteer at St. Joseph’s Food Pantry.

Verhagen also wanted to thank his community for their prayers and support in a more tangible way. He again approached his pastor, Fr. Kysley, and asked, “What would you say if we get a statue here of St. Peregrine?”

St. Peregrine lived in the 14th century. As a young man, he turned his energies into good works, dedicating himself to the sick and the poor. He ended up with varicose veins and cancer of his leg, which was scheduled to be amputated. The night before surgery, he prayed before the image of the crucified Christ. During prayer, he had a vision of the crucified Christ leaving the cross and touching his cancerous leg. When he awoke, the wound was healed and his leg was saved. After his canonization, he became the patron saint of cancer patients.

“Fr. Andy said, ‘Wonderful, but there are two things you have to do. Find a place for St. Peregrine and second how will you finance it?'”

A confident Verhagen said, “I told him, it will be done.”

Verhagen, who had been a sacristan at St. Paul before the cancer diagnosis, attends Mass often. Each time, he would look around and picture St. Peregrine in different places around the Combined Locks church. The body of the church didn’t seem right; by the door — no, he said, too many people would ignore it. “Fr. Andy told me to pray to the Blessed Virgin.”

“On a morning at Mass, the Blessed Virgin hit me over the head and I knew just the place: the chapel. We could move the crucifix to another wall and put St. Peregrine in its place. The lighting and backdrop were perfect.”

He shared his thoughts with Fr. Kysley, who agreed with the placement, but still wondered about the cost. Verhagen said he suggested memorials from funerals or a special collection. “Those weren’t Fr. Andy’s favorite ideas. So I thought, ‘Let’s put the Blessed Virgin to work again.'”

He called his brother to share the idea of a shrine. “We hung up and five minutes later my brother called back. He said he and his wife, Clare, had talked about it and they’d like to finance it for me. Both of them have had cancer. All I could say was ‘Tom, that is phenomenal!'”

The next Sunday, a very excited Verhagen gave the news to his pastor. “I said, ‘Did you order St. Peregrine yet?’ He said no because it’s not financed. I said I have two people who will donate the full ($5,000) amount. Who do they make the check out to?”

The statue was ordered from Italy and Fr. Kysley got prayer cards and medals for people to take with them after visiting the shrine.

“Jerry is really a great man of deep faith,” said Fr. Kysley. “One of the things that impresses me most about Jerry is the joy he brings to those around him, even with all of the physical challenges he faces each day. His deep faith allows him to accept his limitations joyfully, and he continues to fight the good fight with the Lord by his side.”

Fr. Kysley knew the shrine idea was a good one because so many people are afflicted with cancer. With the help of local craftsmen and artisans, the shrine now resides in a side chapel of the church, he said.

“I believe this will be a great blessing for St. Paul Parish and for the many visitors who are welcome to come visit,” said Fr. Kysley.