Women use design skills to turn church into worshipping environment

Malingowski has chaired the liturgy and environment committees at St. Anthony for 32 years. Dessart, who has worked alongside her since joining the parish 27 years ago, pokes fun at her self-appointed title. 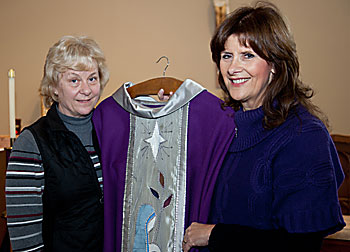 Sue Malingowski, right, and Amy Dessart display a liturgical vestment Malingowski made for Fr. Joel Sember, pastor of St. Anthony Parish in Oconto Falls. In addition to sewing vestments, Malingowski, along with Dessart, serve as church decorators, helping to create a prayerful liturgical environment. (Manu Junemann | For The Compass)

“I always tell Sue that she is the woman (in charge) and I’m the grunt,” she said with a laugh.

Together, they decorate the church for the liturgical seasons with a goal of creating an environment that is inspirational for those who come to worship. Sometimes, achieving the desired result requires some creative artistry.

“One year we had some brown cloth and we walked on it with purple paint so it would have purple footprints on it,” said Dessart. “That was one where we could not stop laughing.”

“We did it in our basement,” said Malingowski, a member of St. Anthony for 35 years. “Then we had Bible study afterwards. The others asked what was so funny. We said, ‘We have to go wash our feet.’ (The cloth) is upside down on the tree (in the church). We still look at it every year and laugh.”

Both women are gardeners, so plants and flowers are showcased during appropriate seasons. They also plant gardens on the parish grounds.

“At Easter, we like a lot of different flowers; we don’t have just lilies,” said Dessart. “We have planted grass in baskets so we would have fresh grass at Easter. It was really cool. It was fun to plant the grass and keep it in Sue’s sunroom. We had to cut it with a scissors because it grew too quickly.”

Among the rewards for the longtime friends is positive feedback from parish members. For example, adding special touches to the Advent wreath, such as berries or other fruits, usually brings compliments, said Dessart.

“People seem appreciative,” said Malingowski. “It’s been a blessing when you’ve been given a gift and you can use it for the church.”

Malingowski teaches family consumer science at Washington Middle School in Oconto Falls. She is an expert seamstress, a talent she also shares through ministry. She made her first vestment in 1985 for then Green Bay Bishop Adam Maida for the dedication of the new St. Anthony Church. A recent vestment for Fr. Joel Sember, pastor at St. Anthony, was a prayerful experience, she said.

Fr. Sember gave Malingowski a special sewing project. He asked her to make a new funeral pall for the parish depicting the resurrected Christ. The pall was first used for her mother-in-law’s funeral last year.

Dessart recalls an early discovery of her friend’s seamstress skills.

“I remember asking her, ‘Did you see those banners they are going to hang over the poles with the stars on them with the watermark silk?’ She looked at me and said, ‘I made them.’ I was in love with how pretty they were,” said Dessart. “They were in the meeting room ready to be put up. It was just amazing to me that Sue did it.

“When Sue gets new fabric, we like putting it up, standing back and looking at it,” she added. “We then decide, ‘We have to do this’ or ‘We have to do that.’ Fr. Joel trusts us. He said that, before he came here, that he did his own environmental work, so he was happy that somebody was putting out the decorations.”

Dessart is a retired teacher. She taught 20 years at St. Anthony School. She and her husband, John, both Green Bay natives, relocated to Oconto Falls from the La Crosse area in 1985. John, also a teacher, immediately became involved in music ministry at the parish. He became friends with Tom Malingowski, Sue’s husband, who asked, “Do you think our wives would get along?”

Tom oversees the building and grounds. He has built several items for the church, including the lector stand. He has also taught confirmation. Tom and Sue serve as a FOCCUS couple for marriage preparation.

John continues in music ministry and has also served on the finance and parish councils. Sue, who has been a member of the choir at St. Anthony for 35 years, regularly pairs up with John to provide music at Mass. She joked that people who did not know her may have thought that she was John’s wife because they sing together and that Amy was Tom’s wife because they would sit together when their spouses were in front of the congregation.

The couples have gone camping and vacationed together in Door County. Wherever they go, the parish is not far from their minds. “We enjoy going to other churches and seeing what they have for decorations,” said Sue.

“We are always checking out the Stella Maris churches (in Door County),” said Amy.

The women recently took on an additional project at the church. Amy chaired a renovation committee that led to the installation of new seating with kneelers and carpeting in St. Anthony Church.

The sanctuary was also renovated. Fortunately, the Feb. 21 fire at the adjacent St. Anthony School did not cause extensive damage to the church. The new seating had been installed only three weeks prior to the fire.

In addition to growing in their own faith, Sue and Amy are both thankful for the opportunity to serve as examples for their children through their ministry. Their children had assisted with decorations over the years.

Sue and Tom have two grown children. Amy and John have three adult children, six grandchildren and three more grandchildren on the way as their daughter is expecting triplets.

The women plan to continue decorating the church as long as possible. “It doesn’t seem like work,” said Sue. “It’s a labor of love.”