Sr. Caroline’s vision of starting a retreat center began while she was serving as a pastoral associate at St. Elizabeth Ann Seton Parish in Green Bay. She discovered the old farmhouse with 12.2 acres of land in a newspaper listing. The property had potential, but needed a considerable amount of work. Sr. Caroline remembers the humble beginnings. 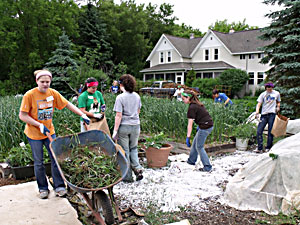 Youth volunteers assist in the garden at The Bridge-Between Retreat Center, Denmark. The Bridge-Between community practices organic farming and sustainable agriculture as a means of promoting a holistic lifestyle. The garden also helps support ministries at the retreat center through the sale of produce with its “garden share” program. (The Bridge-Between | For The Compass)

“I don’t recall who from the motherhouse came out to look at it, but I prayed they didn’t have eyes to see,” she said. “Slowly, but surely, when money was in hand, we did what we needed to do.”

Sr. Caroline lived by herself at the retreat center the first year, 1987. She would go from window to window trying to stop the drafts of cold air.

“I would put sleeping bags on the front and back doors because air was going through everything,” she said. “I remember having soup inside the front door and it was frozen.”

Gifts provided improvements to the property. The cottage, a single room hermitage, was built first as a living memorial in honor of the donor’s mother. A father and son from St. Elizabeth Ann Seton Parish took on repairing the roof of the granary in 1988.

“They spent a week here,” she said. “On the last day, (the father) said, ‘Tomorrow I go in for back surgery.’ Tears rolled down my face. I thought, ‘What a selfless gift.’”

The silo, featuring three bedrooms and a bathroom, was renovated in 1990, and a 600-foot addition was completed in 2002. The later is an example of the power of belief, said Sr. Caroline.

“I remember saying to God, ‘You have the best staff working for you.’ I was searching for answers. I found a book with a poem by Hafiz that read, ‘My heart is a raging volcano of love for you. You better start kissing me — or else!’ I didn’t know what the ‘or else’ was at the time,” she said. “Three weeks later, I was contacted by a contractor.”

The Bridge-Between had secured a $15,000 grant and $7,000 from a lumber company for an addition. The contractor said that he could make it work. Three months later, the farmhouse not only had the new addition, but new siding, a renovated kitchen and bathroom, a new half bath upstairs and new landscaping. The project cost more than $150,000, but the bills were paid with the $22,000, of which $12,000 was returned to the retreat center.

The name, “Bridge-Between,” has two meanings, said Sr. Caroline. It’s a holy name in honor of St. Catherine of Siena, a Dominican, who described Jesus as the bridge between heaven and earth. The other meaning refers to the growth in people who are served by the retreat center.

“We are not about evangelizing people,” said Sr. Caroline. “We are about allowing the gift that God put

inside someone to be revealed. That’s more important to us. All our welcome around the table, no questions asked. We try to meet you where you are.”

The anniversary is not only a time for reflection, but prompts a look ahead. Sr. Caroline sees potential for growth.

“For 25 years, we sustained ourselves, which is a miracle,” she said. “The miracle is the volunteers. Without the volunteers, we wouldn’t be.”

Popular programs such as bread and soup making are among the regular offerings. Guests may also design their own retreat to meet their needs.

“What would you like? We can build on that,” said Sr. Caroline. “I can use that as an opportunity to talk about God. I’ve been asked, ‘What does bread making have to do with your soul?’ God is in bread. I can use every single moment as a teachable opportunity.”

The retreat center continues to operate as a farm, complete with animals and gardens. The “garden share program” provides fresh produce families for $20 per week for 15 weeks.

“People can sign up to get an assortment of produce,” said Molly Collard, executive assistant. “It allows them to eat seasonable vegetables and support the Bridge.”

Ministries offered continue to exceed the amount received in donations. Collard said the retreat center is looking for a boost in its scholarship fund. Despite not receiving large-scale donations, the mission continues, said Sr. Caroline.

“People come who are hungry both for our food and the welcoming, compassion and the spiritual way of massaging the soul,” she said. “I have to thank my community for empowering me to be available to be here, even though it’s not financial (support), they sent me on a mission.”

Sr. Caroline also offers gratitude to the Bridge community, especially Diane Eparvier, who has served on the staff for 22 years. She also pointed to the advisory board, which served until 2004 when a board of trustees was formed.

“What has kept us here is belief,” said Sr. Caroline. “Whatever we have, we can make a difference.”