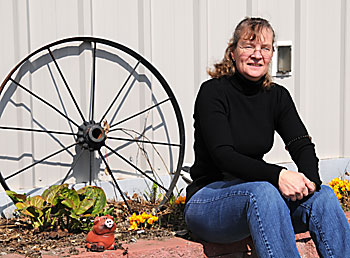 “I just love it. That’s why I keep doing it,” VanEss said. “I like helping to make a difference and working with other people.”

VanEss said Optimistic Teens Improving Society (OTIS) was started with the idea of having kids come together and have fun while also doing service projects. The group meets once a month.

“It’s awesome to see kids interacting with each other and being in a safe environment with the same beliefs,” she said. “They can talk about God and be in a real comfortable situation.”

She noted that 33 youth with OTIS are planning to volunteer their time in Oklahoma this summer, while a group of 12 will volunteer in Cairo, Ill.

Van Ess also participated in separate mission trips to Brazil, Honduras and the Dominican Republic and she has successfully encouraged others to volunteer their time.

VanEss, who was widowed two years ago, was joined on two of those trips by her fiancé Nick Wagner, who is also a member of St. Thomas the Apostle. They’re planning to marry at the church on Sept. 29.

It’s at that church where the bilingual VanEss also teaches first Communion classes to Hispanic parishioners.

“I have a passion for the people,” she said when asked what has kept her teaching for the past 10 years. “I love the community.”

VanEss has been a member at St. Thomas the Apostle since it opened about a decade ago.

In her younger years, she attended First United Church of Christ, but she converted to Catholicism during her senior year at Green Bay East High School.

“When some of my friends would go to religion class I would go with them,” she said. “The classes were really interesting.”

She said that over time she took the teachings to heart.

“I just liked the camaraderie and friendships there,” she said. “There were different things I learned through classes and meetings with priests, and that kind of got me going on a different path, and this is where I am now. I’m enjoying what I do.”