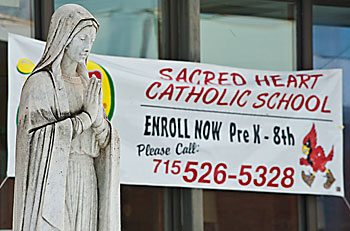 A statue of Mary stands outside of Sacred Heart School in Shawano March 3. Officials from the Diocese of Green Bay apologized to the family of Miranda Washinawatok, a seventh grader at Sacred Heart School, for an incident Jan. 19. Miranda was reprimanded for speaking in her native Menominee language during class and then suspended from a basketball game at the school that evening.(Sam Lucero | The Compass)

The reprimand and game suspension led to meetings between Washinawatok’s family, Menominee tribal leaders and school officials. Later, according to the family, after public apologies promised by Sacred Heart principal Dan Minter were not delivered, representatives of the Diocese of Green Bay became involved. The meetings led to the Feb. 22 apologies.

The letters were written by Minter and by Dr. Joseph Bound, director of the diocesan Department of Education.

“On behalf of the Diocese of Green Bay, I wish to apologize for the events that led up to, and have followed, the benching of Miranda for a basketball game at Sacred Heart School, in part, for her use of the Menominee language in school,” wrote Bound. “The resulting events that transpired were never intentionally grounded in any way that would cause the family and the Menominee Nation to view the Diocese of Green Bay as insensitive to a person of Menominee heritage or any heritage. We wish we could change how that was handled. The truth is that we cannot undo any damage that was inflicted and we are keenly aware of the emotions that have come to bear as fallout in this incident.”

“We will then be inviting all interested cultural groups … to bring ideas and thoughts that can be crafted into an action plan that will bring cultural awareness and sensitivity to all our Catholic schools in the Diocese of Green Bay,” wrote Bound.

He concluded his letter, asking “forgiveness for our actions that have inflicted heartache, pain and anger to all those who have felt these emotions over the past several weeks.”

In his letter to the Washinawatok family and the Menominee Nation, Minter said he regretted that the incident was not handled better.

“I am sorry if my actions caused hurt, brought up old hurts or in any way gave the appearance that I and, through me, this school does not value the cultural heritage of our students,” he wrote. “I ask for forgiveness from Miranda, her family and the Menominee Nation and I ask for your assistance in moving us forward to a better future regarding cultural awareness and sensitivity.”

Tanaes Washinawatok, Miranda’s mother, told The Compass March 1 that she was satisfied with the letters of apology. However, two other letters to the family, one from Miranda’s homeroom teacher, Julie Gurta, and from assistant basketball coach, Billie Jo DuQuaine, who suspended her from the game, did not offer apologies. She believes Gurta should be dismissed.

“(Gurta) does not apologize for slamming her hands down on (Miranda’s) desk and saying, ‘You are not to speak like that…,'” said Washinawatok, adding that Miranda translated three phrases to two classmates into Menominee: “hello,” “I love you” and “thank you.”

In her letter, the teacher stated that her actions were “not targeting the use of (Miranda’s) native language (but) in response to the disrespectful comments and behaviors exhibited by Miranda over the course of the entire day.”

Washinawatok said she had not received complaints about her daughter’s behavior prior to Jan. 19. “(Gurda) could have contacted me to discuss such behaviors,” she said.

The situation was compounded when DuQuaine, a preschool teacher and assistant coach, told Miranda after basketball practice Jan. 19 that she was suspended from that night’s game due to her misbehavior in class. However, the head coach was not aware of the suspension until game time.

“I spoke to the teachers and they said we did not make those recommendations. Billie Jo said it was the principal who made that decision,” said Washinawatok. “Language preservation to Native Americans is part of our culture so I felt personally targeted by Julie’s actions and remarks.”

Richie Plass, a Menomonee tribal leader and Miranda’s uncle, has participated in discussions with Green Bay diocesan leaders. He has offered to assist the diocese in its cultural awareness training. He conducts similar seminars at public schools in the state. “I do a lot of work in the (Indian) mascot logo issue,” he said in a telephone interview.

Plass was among the tribal leaders who initially met with Sacred Heart administrators on Jan. 24. When a public apology was not issued as promised, he contacted the diocese.

He called the letter issued by the diocese “very historic.”

“We do not need to travel too far back in history to see unsettling situations, approaches to settlement and downright deception when it came to relations between the Catholic Church and Indian people,” he wrote in a letter shared with The Compass. “But I can say with all honesty, ever since I have begun talking and meeting with people from the Green Bay Diocese, everyone has been true, honest and respectful in working to a positive (resolution) in Miranda’s situation.”

In addition to Department of Education officials, counselors at Catholic Charities have been working with students at Sacred Heart School.

Minter, Sacred Heart principal, said he is not able to discuss the matter due to privacy issues. “But I do not believe that we have now, nor have we had, racial issues at this school,” he told The Compass in a telephone interview. “This is only my first year here. We’ve had significant numbers of native and other minority populations here. We work to teach the Catholic faith here. That’s our primary mission here at this school … and that’s what everyone needs to keep in mind.”

According to Minter, about 60 of the 103 students at the pre-kindergarten through eighth grade school are Native American.

He said the school is working on plans to celebrate students’ heritage during a spring concert.

Minter, who was principal at St. Louis School in Washburn, Wis., in the Superior Diocese, before arriving at Sacred Heart, said he has deep respect for the Native American culture.

“I actually serve on the principals’ core committee for the Black and Indian Mission Office, which works specifically with Catholic schools and parishes with large numbers of blacks and/or Native American populations,” he said. The office supports Catholic evangelization efforts among black, Indian and indigenous communities throughout the United States.

He hopes to involve the school in activities celebrating the canonization of Blessed Kateri Tekakwitha next October. Blessed Kateri, a 17th-century member of the Mohawk and Algonquin tribes, will be the first Native American saint. “We’re only eight miles south of Camp Tekawitha, so that makes a natural tie-in for us and for the diocese as a whole.”

While Washinawatok, who is a member of Sacred Heart Parish, is still upset with the way the incident was handled, she said she has never lost faith in Sacred Heart School.

“This is Miranda’s seventh year at Sacred Heart,” said her mother. “I wouldn’t have invested all this time if I honestly didn’t believe this was a good school. I just think there are faculty members, in my opinion, who should not be allowed to teach at this school.”

Miranda was named to the school’s second quarter honor roll in January.