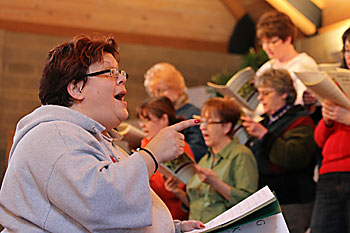 Melanie Teska, pastoral assistant and director of liturgy at St. Rose Church in Clintonville, works with a combined choir of singers from St. Rose and St. Mary in Bear Creek on their Lenten presentation of the musical “Song of Mark.” (Steve Wideman | For The Compass)

Teska, pastoral associate and liturgist at St. Rose for the past three years, is directing the musical for the seventh time.

“Song of Mark,” a musical based on the Gospel of Mark, recounts Jesus’ life from his baptism to his death and resurrection using more than 50 youth and adult choir members and individual singers from both churches.

“The children’s voices make it so beautiful. The blending of the (different phases) of Jesus’ life is really beautiful,” said Rose Belgado, a member of the choir at St. Rose.

“This musical has been such a gift,” said Teska. “It takes people into the Scriptures in a new way. Some people are used to going to Mass on Sundays and kind of letting everything go in one ear and out the other. We listen, but we don’t hear. ‘Song of Mark’ causes us to hear the stories of Mark in a different way as we are walking through Lent.”

“Church rituals are not just things we do, but there are connections to our faith and how we live our lives,” she said.

Grant funds were used to cover printing costs for scripts and music. 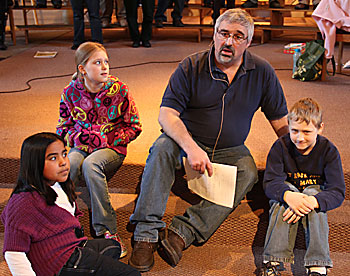 Jesus, portrayed by Larry Rohan, sings to children during rehearsal of “Song of Mark.” The children include Theresa Murphy, left, Chloe Kissinger and Benedict Wood. (Steve Wideman | For The Compass)

Lincoln Wood, parish director at St. Mary and St. Rose, said the musical has really brought the church communities together.

“Any time you proclaim the Gospel it brings communities together,” said Wood, whose wife, Jennifer, and son, Benedict, also participate in the production.

The role of Jesus in “Song of Mark” is performed by Larry Rohan, a member of St. Mary Parish in Bear Creek. Rohan’s two sisters, Margie Cunningham and Colleen Rohan, along with niece Heather Behnke and nephew Steve Flanagan, all from Bear Creek, also participate in the musical.

“My family has been a musical family forever. My mother used to run the music ministry at church when we were kids,” Rohan said.

Rohan, who resumed a dormant love for singing to be in “Song of Mark,” said the role of Jesus is emotionally very moving.

“I don’t feel I’m worthy to even play the role,” Rohan said. “I’m doing it because I enjoy singing and apparently everyone thinks I am doing a good job.”

Rohan said the musical is a true community event.

“It’s a very big deal for Clintonville and Bear Creek,” Rohan said. “Everyone is working on this together. It’s just nice to bring all this diversity together with everyone praying and singing.”

Liturgical composer Marty Haugen authored the play, which Teska said she is directing for the seventh time in her work as a liturgy and music director.

A native of West Allis, Teska said she was asked by Haugen to be a singer in “Song of Mark” when it premiered several years ago at the annual conference of the National Association of Pastoral Musicians in Cincinnati, Ohio.

“Marty took the stories of Mark and brought them alive for people,” said Teska, who said she is leaving St. Mary in June to assume a similar job at Holy Spirit Parish in Kimberly.

Haugen is a composer of liturgical music for Catholic and Protestant congregations. He wrote the “Mass of Creation,” a familiar part of the Catholic Mass.

“Marty is a very humble and dear man who is very quiet and prayerful with a gift for writing music that stirs people’s hearts and brings them closer to God,” Teska said.

Teska said she produced the play at her former parish, St. Robert Bellarmine in Union Grove near Racine and used it as a public relations tool in the campus ministry program at St. Pius XI High School in Milwaukee.

“We used the musical in outreach efforts to our feeder schools,” Teska said. “The kids learned they could experience Scripture with laughter and tears of love and joy.”

Teska said the singers from St. Mary and St. Rose are “having a blast” preparing to present “Song of Mark” to the Clintonville and Bear Creek communities.

Being a liturgist is a first love and passion for Teska, who said she holds a master’s degree in pastoral music and liturgy.

“I love working with the rituals of the church. It’s something I was meant to do. It’s a passion of mine,” Teska said. “And I love this show. Marty Haugen did a great service to the church when he wrote it. It brings people together in ways they don’t even know are happening.”