Couple knows the pain of divorce, and the healing annulment brings 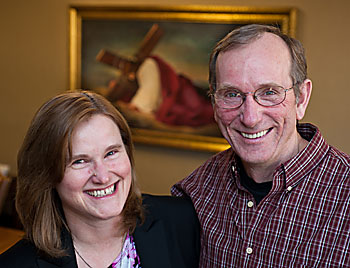 Mike and Debra Brandt, members of St. Anthony Parish in Tigerton, struggled through divorces before seeking to have their previous marriages annulled by the church. They were remarried in the church in 2002 and today help other divorced couples considering the annulment process. (Sam Lucero | For The Compass)

The Brandts’ experience of divorce was different. Debra said she initiated her divorce while Mike was asked for one.

“Neither one of us wanted to get divorced,” said Debra. “Mine was (because of) addictions my spouse had. I tried to get counseling. I dealt with it for a good half — if not more — of our marriage. I felt, ‘I can’t do this anymore. It’s not good for our children.'” Her marriage of 21 years ended in 1999.

“My wife told me she was asking for a divorce,” said Mike. “I was totally opposed to the divorce. I didn’t want anything to do with one. I was still very much in love with my wife.”

He said the experience was crushing. “It just devastated me. I lost like 50 pounds just going through the divorce. It was hard for me to accept.” After 26 years of marriage, he was divorced in 2000.

Mike and Debra, members of St. Anthony Parish in Tigerton, met while both worked at Hillshire Farms in New London. It was their common experience of a failed marriage and, soon after, discussions about faith that brought them together.

Debra had fallen away from the church, even though she was married in the church, and had her three children baptized. Mike was a devout Catholic and he said he leaned on his faith to help him through his divorce.

“Over the matter of a year, while he was going through his divorce, we got to know each other,” said Debra. “In our discussions I saw a need to want to go back to church. In our talks I could see not only his love of family but his love of God. That’s something that I hadn’t had in my life for a while.”

Mike said he always went to Mass during or after his divorce. “Sometimes I wouldn’t go at my own parish,” he said. “When you come from a town where there’s only 100-some parishioners in your church, everybody knows everybody. So when you go, you feel so ashamed. The guilt is almost unbearable.”

He remembers taking his oldest son, Tim, fishing on their boat at Shawano Lake on Saturdays and attending evening Mass in Shawano to avoid the guilt. “That was my rule for the kids when they lived at home: ‘You stay by Dad, you have to go to church.’ Tim was the only one to stay with Dad.”

Tim, now Fr. Tim Brandt, was ordained to the priesthood in 2009.

According to Mike, his openness about his unwavering faith in the midst of and after divorce helped bring him and Debra together. “She said she thought about going to church. I said, ‘I never miss Mass, no matter what. That is the one thing, the glue that holds me together. Without God, I would be a worse basket case than I am right now,'” he told Debra.

With Mike’s support, Debra returned to church. “The first day back was quite emotional for me,” she said. “It took maybe a year for me to get over it.”

As the couple grew closer to each other and their shared faith, they came to a crossroads, one that other divorced Catholics experience: whether to seek a church annulment.

“We actually got married at the courthouse first because we didn’t think we could get annulments,” said Debra. “We heard it was so hard to get. Then we went to the church in hopes that we were going to be able to make it right.”

They regret not seeking annulments first, but remember being unnerved by the process.

“I guess the paperwork was kind of intimidating,” said Mike. “In my heart I knew that I wanted to at least try for an annulment. If it wasn’t to be, then it wasn’t. I believed in my heart that God wanted us to become good in the church. You worry about costs and stuff, but then I found out that the cost is really minimal, $350 I think. And if you can’t afford it, you can have it done for free. Most people aren’t aware of that.”

Fr. Bob Kabat, judicial vicar for the diocesan tribunal, who works with couples seeking annulments, said the process “tries to address the need for healing, insight and growth by asking for information from the person who approaches us.” In the process, the person shares his or her life story. “The information shared will focus on their family background, their courtship and their marriage,” said Fr. Kabat. “The former spouse is invited to be part of the process, but does not have to participate if he or she does not want to. Witnesses are also chosen by the former spouses.”

For those who have gone through a divorce, the diocesan Marriage Tribunal can help the healing process, said Fr. Kabat. “It acts as the church’s judicial system to evaluate the bond of marriage a person created with their spouse.”

Mike and Debra were guided through the process by annulment advocates, Catholics appointed by their parish to assist men and women seeking annulments. Today, the Brandts serve as annulment advocates for the parishes in Tigerton, Marion, Leopolis and Wittenberg. They also volunteer as FOCCUS facilitators, helping to prepare engaged couples for marriage in the church.

“Once our annulments were granted, we flourished,” said Debra. “We got married in the church and from there it just bloomed. We wanted to do more to help others, so within that first two years after being married in the church, we became extraordinary ministers of holy Communion, started helping with parish events, then became annulment advocates. We felt very strongly, being that we had both been through divorces, that we would have something to offer others.”

Today, church ministry has become a significant part of their lives. Debra serves as pastoral minister at St. Anthony Parish and will complete the diocesan Emmaus Lay Ministry Program in May. Mike is in his fourth year in the diaconate program and anticipates being ordained to the diaconate in the summer of 2013. While the trauma of divorce is something they say no one should experience, the Brandts believe their faith has pulled them through. “Ever since we’ve been married, we both pray every day for our ex-spouses,” added Mike. “We pray that they find happiness as we’ve found happiness.”

They now encourage other divorced Catholics to experience the fullness of the church by considering the annulment process.

“God really misses you and the church misses your full participation,” said Mike. “We need you to come back and be able to participate fully. Because then you will know the true love of Jesus and Jesus always forgives, no matter what.”