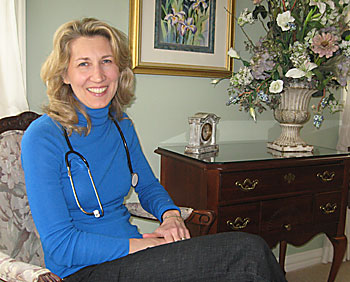 The recent Health and Human Services (HHS) abortion mandate in the Senate health care bill is very concerning to Goldsmith.

“It really is all about religious liberty,” she said. “I follow the state and national politics because I’m so concerned that we are in such danger of losing that liberty. There’s always this fight against the slippery slope. It’s everywhere. There are excuses made whether it’s for money or for the good of the system or for the good of society in many different areas of life — from the babies in the womb all the way to the elderly. It’s a constant underlying pressure that you sense, no matter what specialty you’re in.”

She said the stakes in this battle are more than people want to admit.

“If we lose our religious liberty, then we’ve lost the whole fight for life. If we don’t respect life, what do we respect?”

Goldsmith earned her undergraduate degree at the University of Notre Dame and went to medical school at the University of Wisconsin-Madison, where she met her husband. “The student population was very Catholic at Notre Dame, 95 percent were practicing Catholics when I was there. This issue wasn’t even discussed because that’s how people were.”

It was a bit of a culture shock when she headed to Madison. “I was so stunned at how anti-Christian, anti-life people were there. It was such a stark change from Notre Dame,” she said. “We decided to form Med Students for Life.”

One of the group’s activities was to hold a debate.

“The biggest auditorium in the school was filled,” she said. “We invited a bioethicist and a pastor from the United Church of Christ. It was an amazing experience. The final conclusion of the debate was between me and the pastor. He admitted that a baby sperm whale is at least as important as a baby in the womb and everyone’s mouths dropped. He kept saying everything is the same.”

During her OB/Gyn rotation, Goldsmith was warned not to let everyone know how pro-life she was. The thought process she encountered was that a baby wasn’t human until it was born. “The doctors called it a blob of tissue,” recalled Goldsmith. “Here are these people who should be the most pro-life of all the specialists, because they are taking care of the baby and the mother until delivery — they were actually the most pro-abortion of all the specialties I encountered.”

For her residency, Goldsmith went to the University of Iowa. “I realized I couldn’t do OB because I wasn’t going to give contraceptives and I wasn’t going to get involved in the abortion issue,” she said. But she did receive extensive OB anesthesiology experience there.

“An OB anesthesiologist understands the physiology of a pregnant woman better than OBs do,” Goldsmith explained. “We can actually have a real impact during labor and delivery. I ran the Iowa University high risk OB consult service for a couple of years.”

She said the greatest challenge to life there were the perinatologists, the high risk obstetricians. “The people who should have been doing everything to save the baby were fighting with us,” she said. “I was very blessed to be in a very pro-life OB anesthesia group. We made it very clear to them that abortion was not an option and we were going to do everything we could to save the mother and the baby.”

Since moving to the Fox Valley, Goldsmith has increased her pro-life activism. “I’ve gone on the March for Life a couple of times. I got to walk with Bishop (David) Ricken. That was a beautiful blessing. I was fortunate enough again to give a talk about being in medicine and pro-life at the March for Life for a couple hundred youth. I was really impressed by their enthusiasm.”