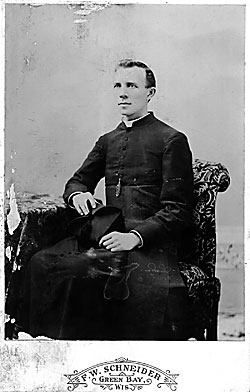 Beth Mader of Allouez is trying to identify a priest whose photo was in a family member’s collection. The photo was taken between the 1860s and 1880s. (Photo courtesy of Beth Mader | For The Compass)

That’s when she came across the picture of the young priest, included in a photo album dated from 1887. She’s guessing the photograph was taken sometime between the 1860s and 1880s. It is stamped S.W. Schneider and was found in a photo album that today belongs to her second cousins once removed, Joe and Clara Van Ess of Sugarbush. They got the historic photo album from Joe’s late aunt, Marilyn (Van Ess) Coppens.

Someone with family connections to the Town of Humboldt, the rural area east of Green Bay, may be able to help her discover just who the young priest is, said Mader.

And yes, she’s already tried the Diocese of Green Bay itself for help. Even the well-versed archivist for the diocese, John LeDoux, couldn’t identify him. “He passed the photo around, and checked the Clergy Open Access Files and parish files, but didn’t come up with anything,” said Mader.

Here’s what is known.

The picture is in a red cloth-bound photo album emblazoned with “GAR Album.”

The initials stand for “Grand Army of the Republic.” The Grand Army of the Republic (GAR) was a fraternal organization founded in 1866 and composed of veterans of the Union Army, U.S. Navy, U.S. Marines and U.S. Revenue Cutter Service who served in the Civil War. The album’s cover features a military medal and a medallion with the profile of a soldier.

In an old trade publication called “The American Stationer” Mader said she discovered that the photo album from 1887 would have sold for $10, equal to about $200 today.

It must have been quite a keepsake for the family, said Mader. Within its pages are many formal portraits of family members, some of whom are identified and others who are not — including the priest. Many of the other portraits in the photo album were identified as taken by C. F. Schroeder.

This information from the Brown County Library might also help identify the mystery priest, said Mader. According to city directory from the time period, the F.W. Schneider studio first appeared on the list in 1887 — the same date that’s on the photo album. The guess is the F.W. Schneider studio may have debuted in Green Bay between 1885 and 1886. The studio last appears in the city directory in 1907 — 20 years later.

“While tracing my mom’s side, I found that her paternal great-grandparents were Catholic. My mom was raised Lutheran and never knew about her Catholic roots,” said Mader, a member of Christ the Rock Community Church in De Pere.

Van Es), Vincent and Fontaine families who hailed from the Town of Humboldt area,” said Mader. “I have no idea where this priest would have served, although at least some of the people in the album went to St. Mary Church in Humboldt. Since the photo was taken at a Green Bay studio, I’m hoping he was at a local parish.”

She knows that some of the other young adults in the album — seemingly around the priest’s age — were born between 1860 and 1880. These were among the early settlers to an area adjacent to the growing City of Green Bay that was still heavily forested. Backbreaking work was required to clear the land. And some of these young men found themselves drafted to serve in the Civil War.

For Mader, it helps bring perspective to her life. “You need to live your life more purposely,” she said.

Mader’s maiden name is Zeise, and no mystery quite like this one turned up while researching her father’s side of the family. She’s become quite adept at using local resources like the Brown County Library’s and the University of Wisconsin-Green Bay’s local history departments. She came across important information on the Van Ess family while on an unrelated visit to the Neville Museum to pick up a copy of a historic photo that included her mother.

While waiting in the gift shop there she found a magazine celebrating the history of the Town of Humboldt. And that is how she ultimately met her second cousins, once removed, Joe and Clara Van Ess of Sugarbush, caretakers of the photo album.

“How can I get to the bottom of this?” That’s the question Mader said she’s been trying to answer since last fall. She’s hoping that someone will know something about the mystery priest. He would have passed away many years ago, but just perhaps older adults might remember this priest from their childhood or hearing about him from others as they grew up.

“That’s my hope. I don’t think it’s a mystery that’s unsolvable,” she said. “In 160 years’ time how did we go from people knowing exactly who they were and now not knowing?” Mader pondered.

“I think any time someone feels that call in their life to serve God in that way is to be celebrated,” she said of the mystery priest.

If you have any information Mader asks that you e-mail her at [email protected].