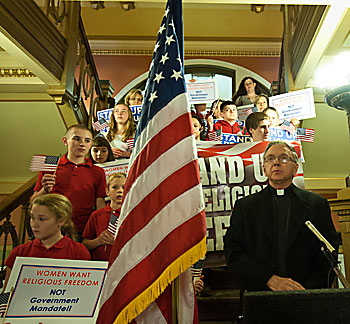 Fr. John Bergstadt, pastor of St. John the Baptist Parish in Howard, prepares to read a letter from Bishop David Ricken at a “Stand Up for Religious Freedom” rally held Marach 23 at the Brown County Courthouse rotunda. Several hundred people turned out for the rally in opposition to the U.S. Department of Health and Human Services (HHS) issued mandate requiring all employer health plans to include free contraceptives, sterilizations and abortion-inducing drugs.  (Sam Lucero | The Compass)

The U.S. bishops are opposed to the HHS mandate because it infringes on religious freedom. They have set aside March 30 as a day of prayer and fasting for religious liberty.

Tina Pallini, one of the event’s organizers, welcomed the rally participants, who held signs and placards reading “Stand Up for Religious Freedom” and “Women Want Religious Freedom NOT Government Mandate.”

“Citizens are standing in prayer and public witness to affirm our religious freedom and to oppose the governmental mandate, an unprecedented and direct attack on our constitutional rights and our religious freedom,” said Pallini, former respect life coordinator for the Green Bay Diocese.

“We are here to stand up, to speak out, to pray and to say ‘no thank you’ to the mandate that infringes on our constitutional rights which our country was founded on,” she added.

“The one thing that draws us together is faith,” he said as he reached the podium. “We might look at God in different ways, define him in different ways, but it means someone beyond ourselves and all of us turn to him now in prayer.”

In his letter, Bishop Ricken told the group that the rally was “an assembly of faith.”

“Faith in our freedoms, faith in our ability to join together for the common goal with other faith traditions and most importantly of all, faith in our God-given rights to religious liberty in our own country,” Bishop Ricken wrote.

While some people want to “water down” religious freedom into “something more akin to freedom of worship,” said Bishop Ricken, “We do not and we cannot accept that watered-down version of the most cherished of all American freedoms. Because if we give in on this erosion of our basic rights, then the God-given right to publicly practice our religion is trivialized into a narrowly defined set of standards that are relegated to the four walls of a worship space. We cannot and we will not confine the practice of our religion to the four walls of a religious space.”

In his statement, Bishop Ricken said that, in the spirit of the new evangelization, “we are called … to shout from the mountain tops so that our voices and the message of our faith reach the four corners of the earth.”

According to Bishop Ricken, the “orchestrated attack” on religious liberty goes beyond the HHS mandate.

“This list of attacks continues to grow and, if we give in on one of them, then there becomes a real possibility of a cascade of attacks that will continue to chip away at our religious liberty again and again,” he wrote.

In his most strongly worded part of the message, Bishop Ricken said people of faith “will not sit still” as religious rights are curtailed.

“We will not be passive participants. We will not be silent. We will not be the generation responsible for allowing this freedom that Americans have fought so hard to achieve slip away,” he wrote. “Our resolve as people of faith is to join together to fight these attacks, one by one, day by day, week by week.”

He said it is the responsibility and birthright of all people — Christians, Jews, Muslims — to “defend our most cherished freedom.”

Bishop Ricken ended his statement by asking everyone to join the bishops in prayer for religious liberty. He said that a new initiative by the U.S. bishops will be announced soon which will focus on prayer as a way to highlight the importance of defending religious fredom. “The initiative will lead into Independence Day, July 4, a key day in the nation’s history,” wrote Bishop Ricken.

Following Fr. Bergstadt’s appearance, Drew Mariani of Relevant Radio addressed the group, giving a history of the HHS mandate. Similar rallies, sponsored by the Pro-Life Action League and Citizens for a Pro-Life Society were held at over 150 sites around the country on March 23. For more information on the rallies, visit standupforreligiousfreedom.com.