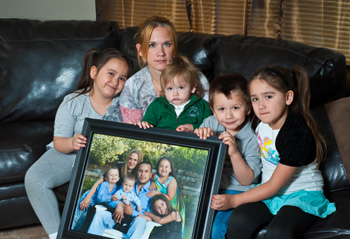 Jennifer Martinez is pictured with her children Yuliana, left, Giovanni, Jaime, Jr., and Isabel in their Manitowoc home March 31. Her husband Jaime was deported to Mexico on March 23. (Sam Lucero | The Compass)

Inside the nondescript bus, Jennifer’s husband and the father of her four children, 32-year-old Jaime Martinez Espinal, his wrists cut and scraped from handcuffs binding his hands, prepared for his forced return to Mexico as an undocumented resident.

“It was so heartbreaking. Our oldest daughter, Isabel, who is 6, was so upset she kept throwing up. The worst part was how they treated him like a common criminal,” said Jennifer, who packed her four kids in a borrowed car and raced from Manitowoc to Chicago after learning for the second time in seven days that the Department of Homeland Security planned to deport Jamie.

Supporters of Jaime Martinez, including U.S. Rep. Luis Gutierrez, D-Ill., say the deportation of an individual with no criminal record is in violation of a recent policy by President Barack Obama designed to stop such family breakups.

“To think a family has been broken up to comply with an outdated immigration policy,” Sr. Marlita said. “Our federal government needs to do some immigration reform. It’s been due for 10 years.”

Known throughout the Manitowoc area as a hard worker who put in 70 hours a week at his restaurant job while setting aside his spare time volunteering at the local YMCA, Jaime Martinez left his home in Mexico City in 1998 and crossed illegally into the United States.

“Like most people, Jaime came to the U.S. to seek a better life for his family,” said Stacy Taeuber, an immigration attorney from Madison who represents the Martinez family. “The fact is there is no easy path, even for those undocumented residents married to U.S. citizens, to attain legal status. That’s part of what is broken in this system. Even if you marry a U.S. citizen it could take up to 10 years outside this country before attaining legal status.”

Jennifer, a native of Manitowoc, met her future husband 14 years ago when both were 18.  The couple eventually settled in Manitowoc where he found a job at a restaurant as a cook.

Trouble began when the couple, at the advice of a Green Bay attorney, traveled to Mexico in 2002 to obtain a fiancé visa in order to marry. The visa was denied because of Jaime’s earlier illegal entry in the U.S.

Jaime attempted to return to the U.S. in 2003, but was turned back and not officially deported. If he would have been deported, that would have given ICE legal grounds to declare him an “egregious” violator of U.S. law and made his March 23 deportation justified, explained Taeuber. “He was never charged with a crime.”

Jaime tried again and managed to enter the United States. Jaime and Jennifer were married by a judge in 2004 and at St. Thomas the Apostle Church in 2009.

Local and federal officials won’t say who tipped off authorities about a month ago that Jaime Martinez was an undocumented resident. Manitowoc police took him into custody and turned him over to ICE investigators who placed him in the Dodge County Detention Facility in Juneau on a deportation warrant.

Local church officials and friends immediately began work to keep Jaime from being deported to Mexico.

“It is very sad for a family to be separated, especially in these circumstances where there has been no terrible crime of which Jaime Martinez has been convicted,” said Sr. Marlita. “Jennifer will continue to have our support and continued prayers.”

Efforts to stop the deportation process hinged on a 2011 move by the Obama administration to prioritize deportations, a process called prosecutorial discretion, based, in part, on an individual’s criminal record.

In an August 11, 2011, memo by ICE director John Morton, negative factors to consider in exercising prosecutorial discretion are: individuals who pose a threat to national security, serious felons or individuals with a lengthy criminal record, known gang members or others that pose a risk to public safety or those with a “egregious record of immigration violations” including illegal re-entry into the U.S.

Court records show Martinez has misdemeanor convictions of disorderly conduct in 2000 and 2011, although the latter was dismissed. The convictions did not play a part in the deportation proceedings, Jennifer Martinez said..

“According to the Obama administration when they announced this policy it was to use (limited ICE) resources in a way that puts public safety and national security first,” Taeuber said. “In this case this is simply not true. Jaime was the sole provider for five U.S. citizens. It is his children, in particular, who will suffer.  As a result of this action we are creating another fatherless family unable to support themselves. Deporting Jaime does nothing to improve national security or public safety. In fact, it is taking away resources from those efforts. Clearly, we have a broken system that needs fixing.”

Douglas Rivlin, communication director for Congressman Gutierrez, told The Compass on Friday that Gutierrez, chairman of the Congressional Hispanic Caucus Immigration Task Force, attempted to personally intervene in the Jaime Martinez case, but ICE officials failed to return his calls seeking to discuss the case.

“We were a bit surprised” that a query to ICE from a Congressional office did not generate a call back, Rivlin said. “We were trying to buy time so the (Martinez) case could be looked at.”

ICE officials did not return calls from The Compass seeking comment on the story.

Rivlin said there “seems to be a disconnect” between the Obama administration and its desire to maintain families of undocumented residents by setting priorities and ICE efforts to deport those who pose a threat to national security and public safety.

“It raises a bigger issue on whether the president’s policy is being enacted on the ground as it should be,” Rivlin said. “We are hearing this (circumstance surrounding the Martinez deportation) is common.”

“We have a dozen or so cases like this on our desk at a time,” added Rivlin.

Taeuber said efforts were exhausted to stop the Martinez deportation, who must now spend up to 10 years out of the U.S. before being allowed to legally return.

“Our question is why, given the Obama administration’s new focus on getting the worst of the worst, why Jaime Martinez? They got a good man,” Taeuber said.

Sr. Marlita said the St. Thomas community will do their best to see to Jennifer Martinez’ needs in the absence of her husband.

“Jennifer will continue to have our support and continued prayers,” Sr. Marlita said.

Martinez said that after the white bus carrying her husband drove from sight Friday morning in Chicago, she turned to God, along with a group of 50 or 60 people praying outside the gates of the ICE deportation center.

“I reiterated my faith in God. Those 50 or 60 people pray every day outside the deportation center for those people getting taken away from their home. It was touching,” she said.

Martinez said the federal government’s policy aimed at keeping families of undocumented residents together “didn’t save my family, but maybe it will save someone else’s.”

She recalled the last time she saw her husband, through thick glass at the ICE deportation center as her children, especially Jaime, Jr., pounded on the glass wondering why he couldn’t talk to his father.

“Jaime not being here has left a huge hole in our family. It’s indescribable,” Martinez said. “My only hope is that someone starts thinking about humanity, not policy.”

Martinez said she is not mad at God over her husband’s deportation.

“The only thing that has kept me going is my faith in God,” Martinez said. “God will let Jaime and me be together again some day.”

Martinez said her only option may be to move to Mexico with the couple’s children. She is planning to obtain needed passports for all of her family.

“As much as I don’t want to live in Mexico, I married my husband for better or worse,” she said.

UPDATE: Jennifer Martinez reported on March 26 that Jaime made it safely to Mexico City, his hometown.